Officer Julien Lowe gets 40 to life 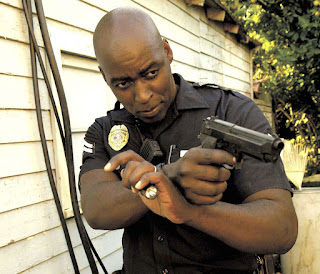 Before Breaking Bad, before The Wire, before True Detective, before all the gritty TV dramas that show the true underbelly of the American criminal justice system and its symbiotic relationship with political power there was The Shield. Broadcast on the FX Channel for 7 seasons between 2002-2008 The Shield was the one that started them all and, for my money, still has some of the best WTF just happened moments of any TV show ever. I'm talking about stuff like  Season 3, Episode 5, Mum – Aceveda’s Rape but there are so many more. A series driven by its hard charging anti-hero Vic Mackey (Michael Chiklis) who brought the 1960's machismo of James T. Kirk and Steve McGarrett into the 21st Century this show delivered episode after episode for the duration of the post 911 Bush presidential years. It had an outstanding ensemble cast with a few big movie star cameos in some of the later seasons but it's season 1, 2 and 3 that really shine like the LA sun on a Compton parking lot. The writing and character development gave viewers fully fleshed out people of all races and professions. Two actors who made the most of it were CCH Pounder as Detective Wyms and Benito Martinez as Capt. Aceveda who gave outstanding performances and created real 3 demential characters with mixed motivations and serious issues. In fact, one of the most satisfying aspects of The Shield was the way the writers portrayed ethnic minorities as real, flesh and blood, people instead of the cut out stereotypes more common on TV and film.

One of these conflicted characters was officer Julien Lowe played by Micheal Jace who's lot it was to be a "church on Sunday" Christian and yet suffer (and yes, I do mean suffer) homosexual yearnings that he can't seem to repress or pray away. After establishing this dramatic conflict most theatrical presentations, and certainly ALL TV shows, would find some way of resolving the issue and make it all neat and tidy - A. Julien comes out of the closet and becomes a symbol of bravery and pride, B. Julian lives a lie and spirals out of control taking it out on unfortunate perps and innocent bystanders, C. Julien commits suicide rather than sin against the dictates of his backward ass, homophobic religion. But that's not how The Shield played it - the writers did something on this show that truly was innovative and awesome in that many plot lines and dramatic conflicts set up in the program would just drop off the subsequent scripts - there was no resolution. People would do things for mysterious, inexplicable reasons that were never followed up on or illuminated. This technique built a moral ambiguity and tension between the audience and the shows characters which is difficult to explain other than to say that it made them real - you felt like they were real people.

And, as it turns out, they are real people and, as Michaeal Jace is about to find out, being on the wrong side of the shield is a lousy place to be.

Deputy Dist. Atty. Tannaz Mokayef told jurors the actor was waiting for his wife and he shot her in the back and taunted her before shooting each of her legs.

Jace's 10-year-old son testified that he heard his father say, " 'If you like running, then run to heaven,' " before firing the second time.

It's honestly like a scene stolen directly from a script of The Shield.