The mission of OpenAI is to research AI and other machine-learning technologies with an eye toward making sure that the robots don't one day go rogue and destroy humanity. 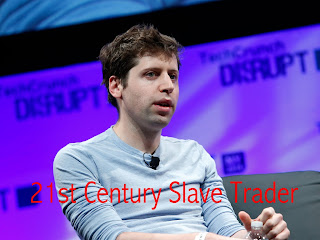 Musk and Altman are on it and have established a $1B (that's B as in billion) "non-profit" called OpenAI to design intelligence that will operate off-the-shelf robots. You see, robots will be ubiquitous and spending money on building them is a waist of resources because without a "mind" the robot is pretty useless. And since they will be everywhere - pumping your gas (or pugging in your Tesla), crawling down mine shafts to get the coal that powers the turbines that generates the electricity to power your Tesla, delivering the pizza you ordered from your Tesla while parked near the beach on a starry summer evening, giving you the greatest blow job you ever had in your Tesla post-pizza dinner - These robots will be doing everything for you. And as with any slave, the slave masters must be on guard for a slave revolt, lest they be killed or, worse, made slaves themselves. So the stakes are high for those of us who think ‘Summoning The Demon’ is a bad idea and I wish OpenAI lots of luck in keeping a lid on the boiling pot of witches brew they're creating.

As Tocqueville noted when reflecting on the three distinct races populating North America in the early 1800's:


Generally speaking, men must make great and unceasing efforts before permanent evils are created; but there is one calamity which penetrated furtively into the world, and which was at first scarcely distinguishable amid the ordinary abuses of power: it originated with an individual whose name history has not preserved; it was wafted like some accursed germ upon a portion of the soil; but it afterwards nurtured itself, grew without effort, and spread naturally with the society to which it belonged. This calamity is slavery. Christianity suppressed slavery, but the Christians of the sixteenth century re-established it, as an exception, indeed, to their social system, and restricted to one of the races of mankind; but the wound thus inflicted upon humanity, though less extensive, was far more difficult to cure.

Now we must make room for a new race, so to speak, of Robot servants who do our bidding just as the slaves of old (or even of today) did for their masters. The effects of this slavery were as pernicious and dehumanizing on the owners as they were on the slaves which does not bode well for our civilizations future even if OpenAI can figure out a way to keep the robots from revolting. The "permanent evil" of slavery and the growth opportunity of robots and AI create a perfect crucible to measure humanities worth and future. We need Christianity NOW more than ever.