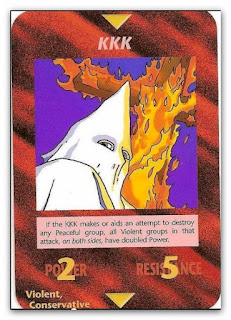 There are a lot of ways to cheat at cards and some of the tactics are very subtle but one dead give away that someone is dealing from the bottom of the deck is a hanger.


The hanger: Made popular by the poker-playing police in Rounders, the hanger is virtually impossible to catch. It is however a dead giveaway that a player is dealing from the bottom of the deck. When an individual card is being dealt from a deck, it is uninhibited by any card above it. When a card is dealt from the bottom however, it can push out the card above it if pushed out with too much force. This results in the bottom card of the deck sticking out from the rest of the deck. The bottom card of a deck should never pop out as a hanger.

When politicians start accusing their competitors of being sympathetic to the KKK you're looking at a hanger. Especially if that competitor is a Yankee real estate developer, thrice married (twice to immigrants) and with a Jewish daughter (converted). For anyone with even a rudimentary understanding of the Klan knows that this bio is NOT KKK material - in fact, it's damn near anti-Klan. I suppose I should be glad that a relatively new American like Marco Rubio has no idea what the Ku Klux Klan was or is today but before he starts leveling charges of Klan sympathy he should probably brush up on US History - Maybe he can download Birth of a Nation on his iPad and watch it during downtime between campaign appearances.


And while I don't expect a Cuban-American from Miami to have much first hand knowledge of the Klan, I do expect a Mormon prelate to know some Klan history - so I was pretty surprised to hear Mitt Romney deal from the bottom of the deck in todays speech.


"Let me say that again. There’s plenty of evidence that Mr. Trump is a con man, a fake. Mr. Trump has changed his positions not just over the years, but over the course of the campaign. And on the Ku Klux Klan, daily for three days in a row."

Oh yes, lets talk about the Klan day after day after day. Romney keeps this line of attack, thoroughly despicable though it is, fresh, vibrant and, based on his comments, legitimate (which it is not). Forget about Trump, this line of attack is absolute bullshit in light of todays reality and should't be used on anyone, including Democrats who are the direct decedents of the Klan.

Let's talk about TODAY. Let's talk about Barrio Azteca, MS-13 or The Wheels of Soul who terrorize communities in a way that would make the Klan blush. These are the new Klans and someone's got to have the guts and honesty to go after them. Who do you think that someone might be?