March 16, 2016
No more you'll wander, my amorous little butterfly,
Flitting about by day and night
Disturbing the rest of all those pretty women
My little Narcissus, young Adonis of love
No more you'll have these pretty little feathers,
This smart and jaunty cap,
Those curls and that lively air
Those rosy, girlish cheeks.
Among soldiers, by Bacchus!
Great moustaches, well-guarded knapsack
A gun at your shoulder, a sabre at your side,
Head held high, bold of face
A great helmet, or a big turban,
Plenty of honour, but not much money,
And instead of the fandango
A march through the mud!
Over mountains, through the valleys
In the snow and burning sun
To the music of trumpets,
Of shells and cannon-balls
Whistling past
Making your ear sing!
Cherubino, to victory
And military glory! 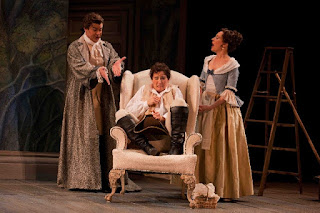 Yes, Cherubino has been cast out by the duke, but don't worry Little Marco, you won't really have to join the military - you'd never make it there anyway. And besides, believe it or not we're only at the end of Act 1 in this comic opera and there are many more scenes for you to play but be ready for the cross dressing and embracement your role requires. There will be deceit and confusion while the audience enjoys the miscues and mistaken identities of the players and it will look at times like horrible chaos is everyones lot but it all works out in the end to joyous celebration.

I've always had an uneasy feeling about Marco Rubio due, in part, to his youthful appearance and big ears but mostly because of the biography he tells at every opportunity. The bit about his immigrant bartender father and housekeeping mother who dreamed big and, hope beyond hope, saw their son become... a politician. A carrier politician.


"While studying law, Rubio interned for U.S. Representative Ileana Ros-Lehtinen.[20] He also worked on Republican Senator Bob Dole's 1996 presidential campaign.[21][22] In April 1998, two years out of law school and 26 years old, Rubio was elected to a seat as City Commissioner for West Miami before moving on to the Florida House of Representatives in early 2000." 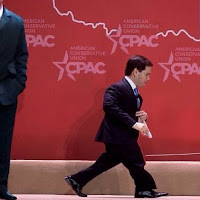 From the age of 26 this young fellow has been living off the taxpayers dime and advancing (with a lot of help from the GOP kingmakers) up the ranks. This trajectory is very similar to a certain fellow on the other side of the political wing who's gone very, very far - some might say higher than his actual natural abilities would allow. The New American Dream. But that's yesterday, lets talk about today or, at the very least, recent history.

Some say that Cherubino was done in my Chuck Shoe-in-your-ass and his "gang of 8" immigration plan while others say it was Christos Christos cross examining the defendant at a nationally televised debate just before the NH primary. I like to think it was my home State of Virginia that sucker punched Marco and sent him to the exit early. You see, the VA contest was very close and if Marco had won this prized Purple State there would have been no end to the praise and endorsements showered upon this bright, optimistic up n' comer who is, after all, the future of the Republican Party. The GOP establishment pulled out all the stops to get Marco across the finish line in first place. A good proof point is the Super Tuesday (March 1) breakdown by Bearing Drift (Virginia's Conservative Voice) the best line of which falls under the Winners section:


Rubio Supporters:  Who would have thought there were so many of ‘em in Virginia?!

Who indeed? Look at the map below and the answer of "who" will jump out at you like a purple turd in a toilet bowl. 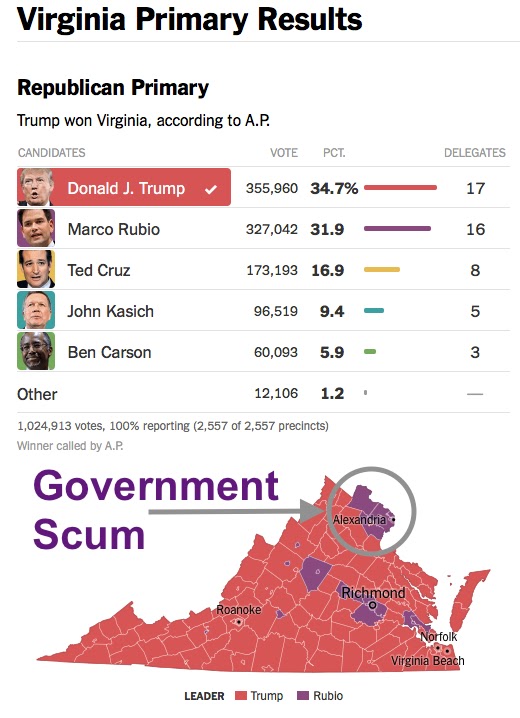 As is quite evident from the map the bulk of Rubio's support is centered right next to Washington DC. And why do all those NOVA residence support Cherubino? Well, There's an answer to that too: 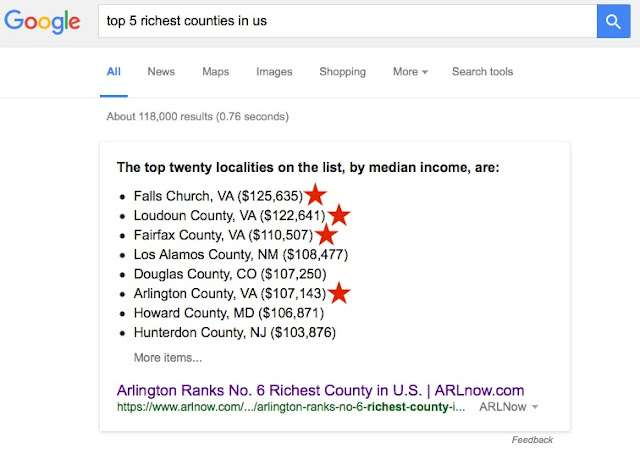 Some of the richest people in the country live in the NOVA counties surrounding Washington DC and they want to make damn sure that whoever becomes POTUS will keep the money flowing into their fat bank accounts. Rubio was their best shot at keeping things "as they are" and if you doubt me then check out the DC primary results from 3/12 where even Gov. K (the new/old hope) lost to Marco. But now Marco is out and Kasich is a maudlin older version of Marco including the biography about mailman Dad (the millennial's don't even know what a mailman is). The press and pundits are talking about a brokered convention or a contested convention and breaking down how many votes it will take to get to the "magic number" 1,237 delegates to win NOT because they're afraid of Trump but because they're afraid of Cruz.


A combination of Trump and Cruz delegates today gives you 1,084 delegates - toss in Carley, Dr. Ben and Huckaboo and you've got 10 more. So really, Trump only needs to win 2 or 3 more States and this primary season is done. Trump, as was noted in a previous KOTCB post, has a very lean organization and political insiders don't think he can even fill the positions in government with such a small human infrastructure - he's not a politician and doesn't know all of those players who toil in the field of the Republican Party. But you know who DOES have a huge organization and knows all the players - Ted Cruz. Every Cruz criticism of Trump actually accentuates Trumps strength with the voters - he's helping Trump to win and will serve as the VP who changed the Republican party and the nation.