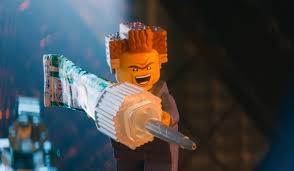 Bernie loves Denmark but, being a Constitutional Monarchist, he would.
Others aren't so happy with the Danes.
My guess is that Donald Trump probably agrees with a good bit of Danish policy and has no beef with the country, but Ted Cruz is worried and thinks Trump might nuke the Danes during one of his middle of the night temper tantrums.


Look, Denmark is sorry, but would Lord Business really nuke Lego's home turf (even on a bad day) and throw the world into absolute chaos? I know he's unpredictable and full of surprises but, wow, nuking Denmark would be hard to talk your way out of - even for the Donald. This "finger-on-the-button" ploy is bogus scaremongering and, for the love of God, think about the people who've had their finger on the button for the last 70 years. What about the "temperament" of the guy who's got his finger on it right now!

Sure, Donald Trump is going to drop the bomb, but Ted Cruz is not? And even if a President wants to fire off a nuke do you think he can do so from his bedside table or sitting on the toilet at 3AM all by his lonely self? Hell no, he's got to go through all kinds of protocols and checklists with the DOD and NSC to even initiate the procedure. I'm sure that Sec. Palin would be able to talk Pres. Trump back from the brink and all would be well - nothing to worry about.

D.W.I. said…
Awesome breakdown of presidents of the post-war era.