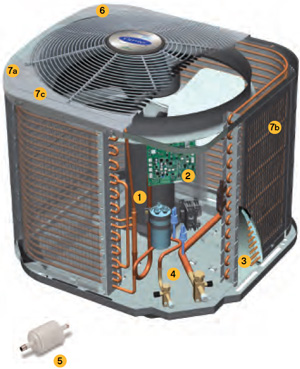 There was a GOP debate last night in South Carolina, but all of it was a formality after Carrier announced the move of its HVAC plant from Indy to Mexico on Feb 11th. Workers very surprised and angry at the move:

"If you don't want to here it other people do so let's quiet down... strictly a business decision".

That's right suckers, you can get as angry as you want about it but you've got no one to blame but yourselves and your union bosses because you voted for it. Ya see, your 60% of the vote for BHO in 2012 gave him the authority to have his DOE issue new regulations for the HVAC industry in 2015 and here's the skinny on that:


“The Department of Energy is attempting to save on power,” Kerry Cox, owner of Cox Precision Air in St George, said. “Problem is no one can really tell how much you save, estimations are about 5 percent annually on a utility bills, but it could cost you close to $1,500 more upfront on a new unit.”
“Manufacturers can no longer manufacture 13 SEER heating pumps after Jan. 1, 2015,” Gause said. “However according to the new regulation there will be a ‘grace period’ afforded to manufacturers and distributors of 18 months after the January 2015 start date. They will have until July 1, 2016, where any remaining inventory of 13 SEER equipment can still be installed, but only as the supply lasts.”

Strictly a business decision because it is no longer economically viable to manufacture air conditioners in Indianapolis (or anywhere else in the United States of America). Who's going to eat the $1.5K? Mexico, that's who because their workers will work for $22 per day not $22 per hour and they'll ship the heat pumps all over the US just like they do from Indianapolis. And remember, all these DOE regulations are designed to reduce the carbon footprint and emissions that US energy consumption (i.e. heating and cooling) impose on the fragile environment so think of the sacrifice of your job as doing something wonderful for the world - and enjoy serving coffee or sorting invoices or answering email request or whatever it is you'll be doing for the next few months, years or life now that your manufacturing job is gone.

Donald J Trump could not have planned a better campaign add than the video posted above as UTC/Carrier management admits that there's nothing wrong with the quality of the work or the products being produced - in other words the workers are doing an excellent job making HVAC systems. So why are they moving the plant to Mexico? Who's selling out these workers? UTC? You think United Technologies wants to abandon a working facility in the US and build a new one in Mexico - just deep six the long time investment in manufacturing equipment and institutional knowledge? My guess is they don't, but simply can't figure out a way to make an HAVC unit that can sell in the marketplace under existing regulations imposed on them by the DOE.

All the debates in the world can't change the feeling in the air that something big is about to change - The apparatus for treating the air is broken and there's a foul stench drifting up from our southern boarder and from across the sea. All the talk can't change it - it's time for action.

D.W.I. said…
Let me tell you where the family who owns the factory in Mexico lives: California! And they drive frickin' Bentleys!
10:39 PM

RobertoSawfless said…
i know that these guys are the best http://myairmatics.com/ vote for them lol, but really, vote for one devil or another lets just pray that he or she will not screw it up.
4:55 AM