“I was made to believe that I was nuts,” 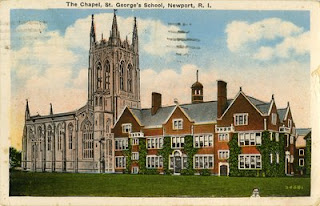 It is a shame that "the biggest little hobgoblin in the union" has dropped out of the Democrat Party primary battle because the reported sexual abuse at St. George's School in Middletown (not Newport) RI would allow one of the moderators at the next debate, assuming there is another Dem debate scheduled, to serve up a big, hot, juicy question on the urgent topic of boarding school sexual abuse and how he plans to stop it. It's true that Lincoln Chafee spent his boarding school years in Andover, MA but he is a RIer, his dad was Senator of the State during these scandalous years and, unlike his Democrat competitors, he is able to speak with authority on the subject of boarding school. Also, Chafee is an Episcopalian and St. George's School is, if anything, and Episcopalian institution.

Anne Scott and Katie Wales Lovkay, who both attended St. George’s in the late ’70s, described on Tuesday how Gibbs allegedly led them into the training room and instructed them to remove their clothes. Scott said she was repeatedly raped by the man, who was more than 50 years her senior. Lovkay tearfully recalled how he allegedly abused her and shared nude photographs of her with male students.
“It was absolutely horrible,” she said, “I became known as the slut of the school.”
When Lovkay reported the incidents to the school’s headmaster, he did nothing, she said.
“I was made to believe that I was nuts,” she said.

Welcome to boarding school Ms. Lovkay - they don't call it Saint Grottlesex for nothing (and for the record, mission accomplished). Knowing the detachment and ignorance many boarding school head masters have for the day-to-day operations on campus (their chief concern being fundraising) it is not outside the realm of possibility that faced with allegations of sexual abuse accompanied by claims of verifiable proof in the form of photographic evidence the head master "did nothing", but I doubt it. Any boarding school student has 1. a faculty advisor and 2. the dean of students who would be the first people in the administration to field such a complaint and, reputation being the load star of all boarding schools, they would act on it rather swiftly. No boarding school wants to have nude photos of a sexually abused student passed around the school because even though they are a "world within a world" the outside world usually finds out about that kind of thing - and for boarding schools that outside world is very, very small indeed being comprised of 10%ers who all pretty much know each other through a myriad of post-boarding school social institutions they belong to. 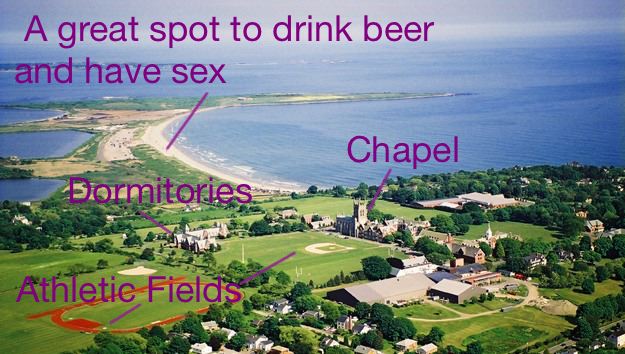 That's not to say that sticky situations don't happen at boarding schools - they defiantly do. Anyone who's attended boarding school knows that certain faculty members and associated staff have "issues"   or they wouldn't be hold up at a boarding school in the first place. A new student to St. George's or any other boarding school is clued in to every "grown-ups" foible, temperament, personality disorder or psychosis within the first two weeks on campus by senior schoolmates who've been there a year or two and know the ropes - they call it tradition. It doesn't take much imagination to conjure up the atmosphere of a world populated by precocious teenagers with raging hormones, unlimited money and superior intelligence, but your imagination will be limited by reason and familiar environments and, believe me, the reality would make you question your sanity. How to manage, instruct and discipline 400 young adults that are sexier, richer and smarter than the authorities charged with babysitting them? Very carefully, that's how and were there, in fact, an athletic director at the school who raped, abused and photographed female students you can bet your bottom dollar that every student at St. George's would have known about it as would most of the faculty. Did it happen? I don't know, but I know for certain that there are St. George's students from those years who DO know and can reveal the truth or lie of the matter.

Then again, Julie Bowen is a St. George's alumnus so...