The Final Wake Up Call 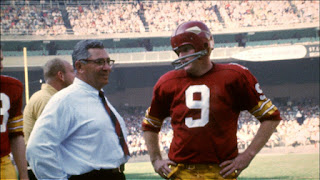 Poor Jonny Football - he's playing pro football in the wrong century. There was a time when no one gave a damn what the QB did as long as he played well and lead the team to victory. Those days are gone, long gone. Tonights pre-game "analysis" had Steve Young's claim that NFL QB's must have the same dedication to his craft as a brain surgeon - the same focus and commitment - to which I say, who the hell would want to be a NFL QB if that's the measure? Easy for the progeny of Brigham Young to forswear hooch and whoring in favor of football neuroscience but what about the player that considers the night life a key element of his game. I mean seriously, why risk life and limb every Sunday sling'n the pig skin if not for the rewards of booze and broads that come along with it. I grew up a Sonny Jurgensen fan and his off the field exploits were as legendary as anything he did on the grid iron - the fact that he'd be out until daylight on a Saturday night, grab a cat-nap and then suit up to enter the arena at RFK and play All-Pro, Hall of Fame football is... Epic! That my fellow football fans is what it takes to be a QB in the NFL.

When Vince Lombardi arrived in Washington DC to lead the Redskins he gave a press conference and here's how the icon of the game saw it:
"I know this— they have a great quarterback (Sonny Jurgensen) and great receivers (Charley Taylor, Jerry Smith, Bobby Mitchell and Pat Richter)."
Asked to compare Jurgensen with Bart Starr of the Packers, he said, "Sonny is a great passer. Starr is a good passer and does a lot of other things well. Sonny will, too, I hope."
When someone tried to raise the issue of Jurgensen's quoted fondness for "Scotch and broads," as detailed in a magazine article, Lombardi said, "I will have no preconceived notions about anybody. They will be all fresh new faces to me. Everything about the past is in the past as far as I am concerned."
When the subject was pursued, in terms of whether night spots would be put off limits, Lombardi said, "There are 15 times more bars in Green Bay than there are in Washington, despite the difference in size. But I believe in as few rules as possible.
Got that ESPN/NFL? From the great man's own lips (the namesake of your championship trophy) "I believe in as few rules as possible" and you can bet Lombardi would be barking orders to Jonny Manziel as his starting QB if he were coaching him tonight. 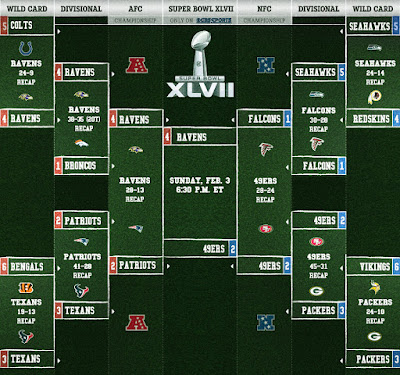 In honor of tonights MNF game between the Browns and the real Browns let's go back to a Super Bowl XLVII in 2013 between the Ravens and the 49ers - I predicted it's outcome in an email I sent to Russia the day before the game:
Yes, the Raiders of the East Coast, but there is even more to this epic contest than the East/West brother noogie that will most assuredly be administered by one of the Harbaugh boys tomorrow
The TRUE Baltimore team is a franchise named The Colts - Johnny Unitas, Lenny Moore, Raymond Berry, "the Greatest Game Ever Played", Super Bowl showdown with Broadway Joe, a Super Bowl win against the hated Cowboys - which exemplified all that is great in Pro Football. This storied team with a loyal fan base (see the 1982 film Diner) risked all on their first round draft pick by choosing a golden armed QB from Stanford named John Elway, but Mr. Ed was not made of the grimy steel required to lead the Colts - the warm Palo Alto sun had softened him to something resembling dog stool in the hot tub - and so he threatened to play BASEBALL for the pinstripes unless he got his way i.e. traded to a West Coast football team. Eternal Shame!!! The Colts organization never recovered from this snub and a year later the owner packed up the team in the dead of night and slinked out of town to Hoosierdom.
The Brown's owner, the tempestuous and gifted Art Model, moved his team from Cleveland to Baltimore in 1996 - why? 1. Because in those day America was still a free country and he could 2. The City of Cleveland expected Model to keep loosing $10M a year for the privilege of allowing his team to play in a dilapidated (like the city itself) stadium 3. The city of Baltimore wanted him. He left it all behind him in Cleveland. The team name and colors, the storied history and championships, the glory and started anew. All he brought with him where his players and the staff that was willing to leave rusty C-town. His new team had a first round pick in the NFL draft and Model chose Ray Lewis - a straight up warrior from The U who had all that it takes to play in Baltimore and the Ravens were born.
Stanford has a debt to pay to game of football. It gave us Elwaaaay!!! and it baked Jim Harbaugh's brain to the point where he took the job of coaching the 49ers instead of his just and rightful role as the savior of the Michigan Wolverines and a return to Big 10 dominance. Brother Jim also played QB for the Indy Colts so there's that...
The day will belong to the Ravens - Stanford shall feel the wrath of the Lord.


Some irregularities have been corrected since that Feb, 2013 contest - J. Harbaugh is now at Michigan, Stanford has been punished but Cleveland is still in purgatory. Tonight the real Cleveland Browns did it again! Rest in peace Art Model.