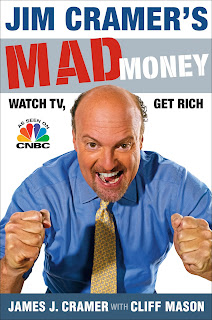 Jim Cramer is a loud, opinionated dudebag who appears on CNBC's  "Mad Money" where he helps investors find "Bull Markets" to boost their stock portfolio. If you wander around Manhattan long enough you're almost sure to bump into him somewhere. He's a True Blue Dem - loves (loved) Eliot Spitzer (and I mean true love) - so it's fitting that he should be part of the panel of "journalists" who asked questions of GOP candidates at the CNBC GOP "debate". But he really got down to business after the debate when speculating on the question of why with MSNBC's Chris Matthews.

Yes, exactly, why do they want to work for government? This IS the question of the day - the question of the century really. Oh, the poor government - it "was on trial" and so were the nerds who work for the media (nerds like Jim Cramer) and so was the economy, though the prosecution faced objection after objection from the defense. But why do these Republicans want to work for the government at all? Jim Cramer just can't understand it, nor can millions of Americans watching who vote, as Jim does, Democrat down the line (+ a good 30% of the GOPers).

The question at hand is, to my mind, quite binary and creates a clear and distinct split in how people see the nation of the United States of America and the Constitution the government operates under. It is not a Republican/Democrat thing or even a right/left thing - it is a fundamental perception of reality that shapes, directs and colors a persons broader ideology. There are countless examples I could sight to draw this distinction, but one of my favorite occurred during one of the high theater moments of the Health Care (Tax) struggle. It came toward the end of Sen. Ted Cruz's marathon stem winder, erroneously termed a filibuster (I wish), when Sen. Dick Durbin takes to the floor and asks the Senator from Texas a couple of Jim Cramerish questions. There's the usual sob story anecdote about a constitute "back home", straw man accusations of heartlessness but eventually DD gets down to brass tacks.

It had been a long night for Senator Cruz and he'd been talking for 20+ hours straight so I'm sure he was tired and, sharp though he is, probably a little mushy in the brain, but the obvious retort to Senator Durbin is, "hey, Durtbag, the Federal Government is not your "employer", you work for the citizens of Illinois. and you and your family and your staff are not "lucky", they're receiving what YOU voted to give them." Jim Cramer and Dick Durbin view the Federal government as an entity in and of itself, like a corporation or mega-foundation, independent from the people who pay for it's services. Those who work for the leviathan have a job to do - they must administer We the People and for doing this dirty work they pay themselves handsomely and "fly first class" in thousands of little ways that your average voter could not even conceive of - if they actually knew and thought about it the citizenry would burn DC to the ground. This Overseer Role is the job description as Jim Cramer understands it and if Carley or JEB! don't want to do that job why are they even running for office. For the corporate stooges at NBC (formally GE, now Comcast), the end game is that some day, once we've walked far enough down the Shining Path, the government will be the employer of us all. There'll still be a place for those boisterous souls pushing Mad Money grubbing stock picks, but everyone will know where the real bread and butter comes from and big hearted "employees" like Dick Durbin will be deciding where folks sit on the jumbo jet.

There is, of course, a different way of viewing the Federal Government, but people like Jim Cramer and Dick Durbin will never be capable of conceiving it, much less admit it into their consciousness. This conception of government sits on the other side of their looking glass - outside of their defined universe of possibilities - but it DOES exist.