October 09, 2015
I've always found Dilbert to be a kind of Sylvia for the info-tech crowd (smarter copy to be sure, though it would be absolutely impossible to write dumber copy than Nicole Hollander's) because there's only a very niche kind of audience that really gets it - and audience of moist robots. My first exposure to Sylvia was at UC Boulder in the early 80's where the comic strip was published in the towns "alternative" newspaper and I must admit a certain fascination with the strip. I was young, inexperienced (cloistered really) and simply couldn't believe that anyone, other than myself, was reading this comic strip and every time I read one I either felt nauseous or confused - it was like a comic hangover. I could not comprehend the reality that Sylvia actually had a loyal following, that the comic was published and that someone (Ms. Hollander) was paid real money to produce it.  One lazy Sunday I was flipping through the news pages with my housemates and voiced my dismay about Sylvia to the assembled crowed. A pasty, redheaded, cat loving, bi-sexual thespian who lived down the hall piped up, "I love Sylvia!"

And so it is with Dlibert. I'm sure there are people out there who love the corporate wasteland of productivity pods and coffee pots that Dilbert inhabits. Strange tech-savey co-workers who get everything wrong all the time and make irrational judgements about an irrational world that's covered with a thin patina of rationality. Dilbert's creator, Scott Adams, is cleaver and a hard worker (for a cartoonist) who's got a pretty interesting blog but his "moist robot" philosophy runs counter to the KOTCB blog prime directive and, most recently, he's going down the Wizard rabbit hole. He's picking up a very popular argument, especially among the Left, that contrary to what seems to be happening in the Middle East and elsewhere, it is President Obama who, Wizard-like, is deftly manipulating events and taking America and the World in a direction that normal people (i.e. everyone) can't understand or appreciate. It's all part of the plan. 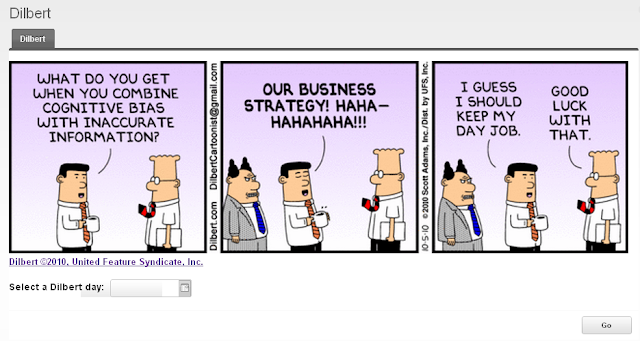 This is a "strategy" that could only be championed by a moist robot:


The Master Wizard filter says President Obama has a winning plan for eradicating ISIS at the lowest cost for Americans.
America’s frenemies have now encircled ISIS, and the American media with their freedom of the press will not be there to watch what happens next.
ISIS is reportedly planting landmines around captured cities to keep the civilian population from escaping. They expected the United States to avoid bombing population centers.
They were right.
But they they did not expect the United States to turn over the fight to Russia and Iran.
ISIS is done.
Unfortunately, so is the civilian population in ISIS-held territory. But living under ISIS probably isn’t much of a life either. And I have heard no one suggest a more humane solution.

Obama is going to let Russia and Iran kill ISIS AND all the civilians living under the ISIS controlled territory. They will also probably kill all the Kurds and any other ethnic minorities in these territories and Scott Adams thinks that's the most "humane" thing to do. Boy, that Obama has really pulled a fast one on the world powers... they have no idea.

This is certainly a more heartwarming theory than Occam's Razor would allow and who can blame the moist robots for dreaming of electric sheep to help them sleep at night. But I can't help thinking that a real human wizard would have made his move in 2009 with the Iranian Green Movement and used it to topple the existing order that's caused so much strife and suffering over the past 4 decades. Nope, negotiations must continue with the existing regime until they don't and even that can be spun as a "win".

I'm sure that among the several Middle East war scenarios/conflict resolution plans worked up by the DOD there is, by this point, one manilla envelope titled "Waste 'Em All" and that seems to be the plan Obama has chosen as official US policy. Let them all kill each other over territory and religious sectarianism and stand clear - God will sort them out. Not much of a Wizard but an awesome moist robot. 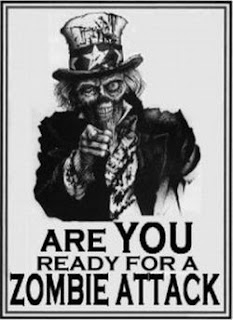 Unknown said…
There are so many thoughts about the robots in our future and many people think that machines will replace us! But I don't believe in it! Maybe some things will be better and easier but people need a warm and tenderness which robots can't give! You can read more on https://kovla.com/blog/sex-robots-made-to-replace-men-by-2025/ only to know another thoughts! But I hold to my opinion!)
7:00 AM