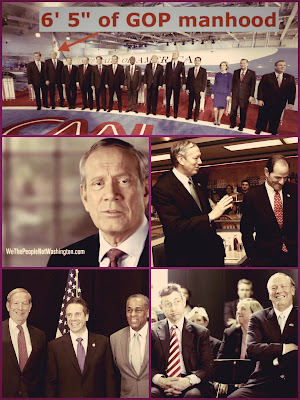 HUGH HEWITT, TALK RADIO HOST: Governor, you signed the pledge to support the Republican nominee and you promptly broke it. By doing so, by Tweeting out that you would not support Donald Trump, have you released Donald Trump to be a free agent again or anyone else in the field?GEORGE PATAKI (R), PRESIDENTIAL CANDIDATE: No. Hugh, not at all. I have not broken the pledge because Donald Trump is not going to be the Republican nominee, period, flat out, I guarantee you that. I would vote...
HEWITT: Governor...
PATAKI: -- for the Republican nominee...
HEWITT: -- you said on Twitter that you would not support Donald Trump. If he's the nominee...
PATAKI: He's not going to be the nominee.
HEWITT: -- will you support him?
PATAKI: He's not going to be the nominee, Hugh. And let me just say one word here. This is an important election with an enormous number of challenges facing the American people. And the first four questions are about Donald Trump.


(CROSSTALK)
HEWITT: Would you really vote for Hillary Clinton...
PATAKI: No, I would not vote for Hillary Clinton.
HEWITT: -- or vote for Donald Trump if he's the nominee?
PATAKI: No, I will vote for the Republican nominee. But let me say this flat out, Donald Trump is unfit to be president of the United States or the Republican Party's nominee.
Look at what he did in Atlantic City.
He says he's going to make America great again?
He invested four casinos in Atlantic City and he said, essentially, I'm going to make Atlantic City great again.
Every one of those casinos went bankrupt. Over 5,000 Americans lost their job. And you know people who, in this difficult economic time, have lost their job and the pain that causes.
He didn't lose anything, 5,000 lost their jobs. He will do for America what he did for Atlantic City and that is not someone we will nominate.
TAPPER: Thank you, Governor.
PATAKI: Thank you.

This is the kind of "principled conservatism" that New Yorkers find so appealing - This guy signs a pledge then "tweets" to the entire world his intentions not to honor it, then bald face lies about it on national TV. Then has the unmitigated gall to attack Trump on the failure of Atlantic City casinos when he, as Governor of NY, did everything he could to expand gambling in his state thereby draining potential revenue from Boardwalk and Pacific Ave. He couldn't stand the idea of Trump and the boys creating an East Coast version of Las Vegas and reaping the rewards so he turned his State into a whore house and kept the money for himself. Pataki is the reason 5,000 Jersey schlubs lost their jobs - not Trump.

Then, after saying all this about his "pledge" he has the audacity to go after Kim Davis, the belligerent (God fearing) county clerk from Morehead, KY who won't issue marriage licenses to the counties massive homosexual community who's juvenile desire to have the cities name on their marriage license has made the backwards assed Kentucky town (always referred to as Rowan County in the press) ground zero of the gay revolution.


PATAKI: Jake, if I can comment on this. Yes, Kim Davis is different from Islamist radicalists from the Middle East.
But on the other hand, we have one rule in America, an elected official can't say I'm not going to follow that law if it conflicts with my beliefs. I think she should have been fired and if she worked for me, I would have fired her. We have to uphold the rule of law.

Got that Kim Davis? "You're Fired" and the Governor has no time for your impertinence (who does that sound like?). Just as an aside, for what it's worth, they actually voted on the issue of same sex marriage in Kentucky 10 years ago and by a 75% margin the people of the State approved a Constitutional Amendment restricting marriage to a union between 1 man and 1 woman. So, in one sense Kim is upholding the law - at least the law she and everyone in Kentucky had something to do with and the fact that the Supreme Court invalidated that law in one of the stupidest rulings they've ever handed down won't change the way the people of Kentucky feel about it.

So Pataki won't vote for Trump but he knows Trump won't be the GOP nominee so he's not breaking his GOP pledge (yet) but how can the Gov. be so sure - is his statement a not so subtle death threat to The Donald? Pataki should be thanking his lucky stars that Trump is in the GOP race because the Elvis from Queens has already accomplished 3 unbelievable things.


George Pataki is just along for the ride and he should kiss Trumps ring the next time they bump into each other in midtown. No one would watch a debate to hear what George Pataki has to say because he's a lazy machine politician who mumbles poll tested bromides and tries not to offend anybody. He's exactly the kind of GOP seat warmer who looses the general election and hopefully, in the not to distant future, he'll be staying home in Peekskill on debate night yelling at his TV.