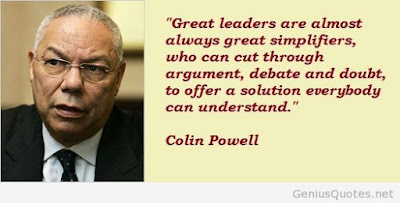 I was enjoying a delicious egg, cheese and bacon breakfast sandwich (home made) Sunday morning when who should appear on the TV screen but Colin Powell for his semi-annual colonoscopy lovingly administered by the goateed Chuck Todd. Topic: Iran Nuclear Deal and as you'd expect the General was for it with the caveat that "it's a pretty good deal" which we can back out of if we don't like the way it's playing out because he doesn't trust the Iranians anyway. That said, why should the Iranians even consider "complying with the outline of the deal"? It's simple and here's how the A-Team diplomat would explain it to the Supreme Leader:


"If I was talking to the Iranians at a senior level, I would say, "What do you think you're getting with these investment you've made in this all of these years? You think that you could actually use these without having the entire world condemn you the next day for being the only nation to have used nuclear weapons since 1945? Everybody will be against you.
"Secondly, you won't accomplish any strategic purpose. You will have killed tens of thousands of people, destroyed part of the city, and the next day, you will see repercussions in terms of what will be done to you. And so this is something that is a waste of your money, a waste of your time, and I think that you ought to enter this deal with the full intention of complying with the outline of the deal, with what's required of you to do, and cooperate fully with the inspectors."

Now think about it, this man was the US Secretary of State for 4 years. These are, unless he's craftily misdirecting Chuck Todd, the kinds of things he said to "senior level" diplomats during his time at Foggy Bottom. Is it any wonder we found ourselves invading Iraq to oust Sadam? Is there any way that Colin Powell could have convinced Bagdad to adhere to UN resolutions with this level of obtuse argument?

COLIN POWELL: I spoke to Tariq yesterday and asked him what Sadam thought he was getting by holding on to his chemical weapons?  I asked, "Does Sadam think he could actually use them without having the entire world condemning him? Why, he'd turn Iraq into a rouge state and everybody would be against you."

DICK CHENEY: And what did Aziz say to that?

COLIN POWELL: He just sort of stared at me for a long time with the same expression you always give me Dick.

DON RUMSFELD: Anything else?

COLIN POWELL: I explained that Sadam would not accomplish any strategic purpose by killing his own people and that all of this was just a waist of time and money. That he aught to comply with the UN resolutions and cooperate fully. Tariq laughed and explained that the Kurds and Shiites were not "Sadam's people" and that WOMD's had, so far, proven to be strategically significant in keeping the Ba'athist regime in power.

CHUCK TODD: General Powell, I would love to talk to you for longer, but we're going to stop there. Thanks for coming on Meet the Press, your 33rd appearance.