Animal Mother: You'd better flush out your head, new guy. This isn't about freedom; this is a slaughter. If I'm gonna get my balls blown off for a word, my word is "poontang". 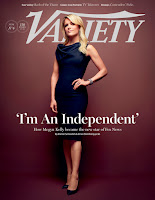 They're in full metal jacket mode down on K Street. Trump can bust on illegal immigrants (undocumented workers) all he wants, call our elected leaders idiots and underperforms, talk and talk and talk about whatever, but if he belittles and insults that beautiful, frisky, scrappy Megyn Kelly they'll fucking crucify him. He's stepped over the line... ungentlemanly... insulting... It's... it's just too much... too, too much. We're talking about Megyn Frigg'n Kelly man, and she's just so damn adorable and playful, but smart and brave at the same time and you just can't... you just... Argh!!!! And I can see where they're coming from - most of these defenders of the little lady would give their left nut for a roll in the hay with Megyn because she's way out of their league - a fantasy really - so, short of that, they can be a virtual knight in shining armor and defend her virtue from the monstrous barbarian who's sacking the city.

But I can also see it from Trump's angle - which is a very different view from grubby journo's and even the well heeled talking heads who might be pulling down mid-six figures per year and able to splurge on expensive call girls. The Donald sits on top of a pile of money, looks like Elvis and knows how to negotiate a deal - he can basically have any woman he wants any time he wants - the three women he's married have all been smoke'n hot and my guess is there have been "others" along the way that would push Megyn Kelly to a 6 or 7 by comparison. In other words, for Donald Trump a girl like Megyn is just another twist with a microphone - a slimmed down Candy Crowley with a dye job. Why put up with her crap and even better, why not insult her and keep the authentic Trump message front and center?

It almost makes you feel sorry for the GOP establishment gubers and (now) their offshoot, "alternative" startups targeted at the anti-establishment hayseeds (ya know, flyover people) who are all in a lather about The Donald and his unbelievable buoyancy in the churning sea of the mediasphere. You'd expect Politico to call Trump a loser, but you know the long knives are out when Erick Erickson pulls Trumps invite to his Red State Gathering in an 11th hour fit of conscience. But Tump's not losing - he's winning and as Red State's own streiff points out Trump is "not fringe" - in fact, he appears to be attractive to what the GOP is always claiming it's targeting - the sensible, moderate middle. In other words, Trump has found Americas political G spot and he's stroking it. 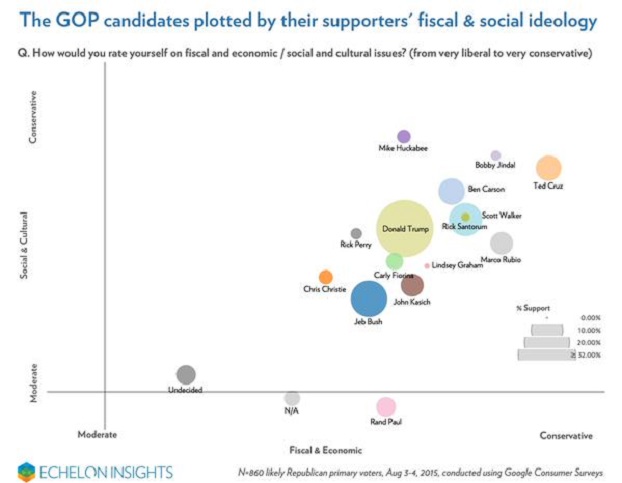 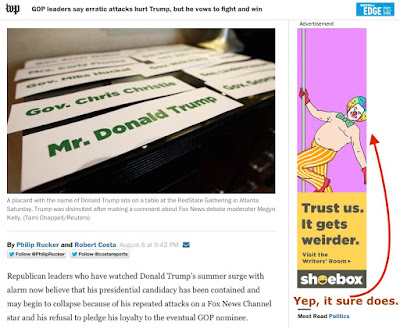 Doesn't matter. WaPo echo's the GOP leaders line... Tump is on the way out. But something on the WaPo web page caught my eye - something seemingly completely unrelated to the subject of the article, but upon further reflection something quite prescient. Who is the mysterious clown pole (poll) dancing? Trump? The GOP? And what of the ominous warning? And what exactly is Shoebox? So I clicked the link and discovered that Shoebox is a little greeting card startup within the larger Hallmark Corp. missioned with designing "cutting edge", irreverent and, in some cases, tasteless greeting cards marketed to the type of people who would never buy a standard Hallmark card. It's sort of like what Red State is to the GOP if you get my analogy. And what these guys and gals come up with is really quite Trumpian in it's own way. Take a gander at the Shoebox crew and you'll find a few Trump supporters in the caucasoid mix (Shoebox is whiter than Twitter). 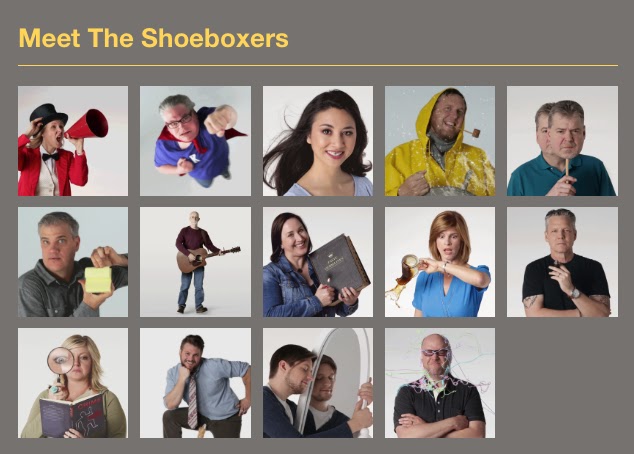 I know there are Trump voters at Shoebox because of this campaign ad they created for the Donald.


A lot more, so gird thy loins GOP and prepare for battle. Ye hath not smote the turdish knight yet and he's coming back for more of your women and gold. Argh!!!