Gran Met gets the hook

June 21, 2015
JuJu and Voodoo rituals have a powerful effect on human consciousness rooted, as they are, in the deep dark sections of the mind -  The unconscious which informs and illuminates the conscious. In my younger years I had a friend who, by his own admission, renounced Christianity as a result of his participation in voodoo rituals he experienced during years of travel to Haiti. This renunciation of the sky God as a sign of atonement with the earth god(s) lead my friend to some dark places, but did not ruin him. In fact, he was quite successful in this world with a town house on Capitol Hill in DC and a summer house in Wisconsin he was a member of numerous cultural organizations funded by the US Government, authored several fascinating books on American Indian culture and was befriended by rock & roll bands who appreciated his academic knowledg of primitive drum music. I never asked him weather he witnessed or participated in human sacrifice rituals while touring Haiti, but his tales of zombies, dolls, mysterious "cures" for illness and the like left the impression that he's seen some crazy shit in his day. 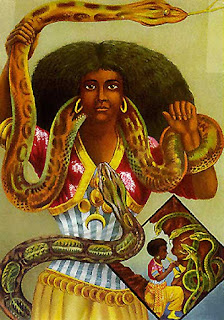 Not everyone is as enamored with Haitian voodoo as my old friend and when it's really close to home - seeping over your backyard fence - drastic measures are called for to send it back where it came from. Some claim that the Dominican Republic hate the Haitians because they are "black", but my bet is that the Dominican's actually hate voodoo. Yes, the DR has it's own version (as you would expect) called Las 21 Divisiones that blends voodoo and Catholicism but often times similarities will enhance the differences and make those differences intolerable. And so the DR is busing their Haitian undocumented workers back from whence they came - to one of the un-happiest places on earth and as you can imagine the DR Haitians are desperate to stay in the Dominican Republic.


"In February, Uganda's government created a National Action Plan to stop the murders and approved a bill to regulate healers - some of whom were practicing as real doctors.
...but child sacrifice will be difficult to stamp out because 'as long as people have such a belief, that practice will continue'."

The Jubilee Campaign is trying to do something about it by documenting the truth and creating an online petition. I, for what it's worth, am against the practice of child sacrifice - call me a Euro-centric, white privileged, colonialist if you want, but I'd open up a can of Jesus whoop-ass on these (witch) doctors and march them into Lake Victoria at the point of a gun for a baptism they'd never forget.

All of this brings me to remark on Season 1 of HBO's "True Detective" which I watched for the second time last week in preparation for Season 2 of the show which starts tonight and say that it was about the most enthralling 8 hours of television I've ever seen. I was in awe of the script - especially it's movement across time, the dialog and acting performances the first go round and for good reason, it's great stuff. But on my second viewing I was amazed at the direction and how the landscape, framing of the the material world fused with the script to echo and enhance the themes and send them reverberating in the mind of the audience. It was a powerful testament to the power of goodness, however clumsy it might be, over the power of darkness - A Rusty Christ taking down the old Childress witch doctor of human sacrifice. Can't wait to see what's in store for Season 2. 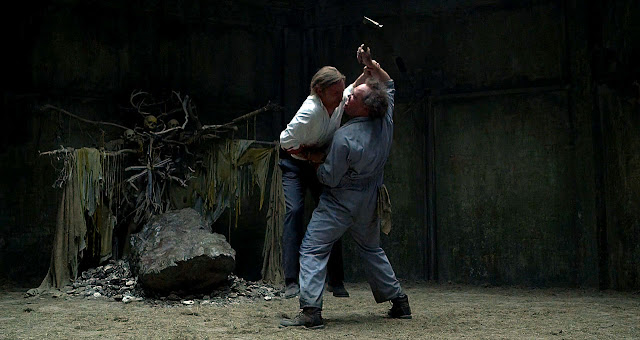