She just won't shut up

May 18, 2015
I'm flying for the next 16 hours - will be in Africa all week. When you get on a plane for this kind of trip a few things go through your mind. Please don't sit me next to a screaming baby, a special needs hyper-active boy, a TFTF tubby, someone who farts, a belligerent drunk, an ebony Ebola victim, two middle aged Chinese woman or a terrorist. It's not personal or bigoted or even insensitive - it's 16 hours of my life space truck' in close quarters and if possible I'd avoid all of the above. By the time the crew closed the cabin door my situation looked good - very good - I'm riding coach in the back of the bus and the middle row tapers down to 3 seats back here with me in one isle seat and a very orderly looking chap in the other isle and nobody in the middle seat - EMPTY - thanks be to God. The nearest baby is two rows up and to the side but she's a tow headed bundle of adorableness and grandmas on the job, No hyperactive seat-kickers to be seen, nor any fatso's on this long haul. No one smells bad except the male steward who's doused himself with middle eastern cologne and no one's drunk (yet). No sign of Ebola but we stop in Dakar for refueling so I'll keep that option wide open. No Chinese yak-yak. As for Terrorists, this plane is full of them - I only hope the Air Marshal shoots straight and has lots of ammo.

Hold on, wait one minute, something unexpected and equally intolerable has sprung into action. A Loudmouth has erupted at 2 o'clock in the row of seats directly in front of mine. Has been working in Africa for years, fighting AIDS, cleaning up after plane crashes, giving out NGO money, and she's got a captive audience of 1 in her isle mate who happens to be sitting directly in front of Mr. White Chocolate Chas T. Sweet Lord, thank you for the blessed advances in transportation, my relative comfort, full belly and countless other delights but could you please make this woman shut up! She's so loud - her African friends don't even consider her American, they say she's African now. Is that possible? Are Africans this loud? I intend to find out and will report back next week.

In the meantime, headphones in - music up, louder, louder... Ah, there we go, that's better. 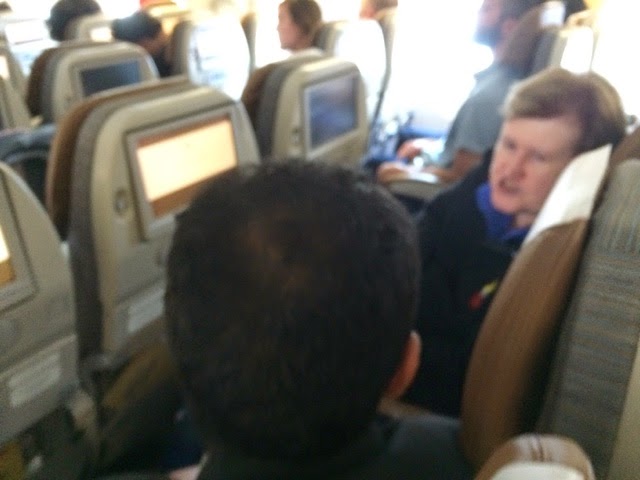