April 27, 2015
When I wrote my Valentine note to Bruce Jenner (or whatever s/he calls s/himself these days) back in February I proposed the idea that maybe all of this gender mutation business was part of an elaborate prank - surely it would be one of the greatest of all time. But it's clear that the decathlete was light years ahead of my simplistic punking and trolling strategy - this dude(ess) is taking Transgender Nation to LGBTQ DEFCON5 by espousing solidarity with Conservative Republicans.

Talk about a "big tent" - this is going to be a 3 ring circus. Book s/him into a prime time slot in Cleveland 2016 and watch Tony Kushner spin in his grave - oh, he's not dead yet, never mind. Still, watching Ted Cruz and Bruce Jenner stump together will be fantastic for this blog and all right thinking people world wide. Speaking of Cleavland, another famous Grover is already strolling down Avenue Q and there's nothing blue about him. 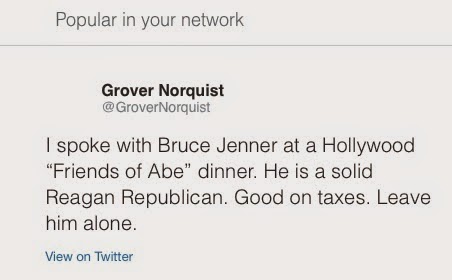 On Avenue Q we need to lower our taxes bro/bitches unless you want to get your sex changed at the VA (I wouldn't recommend it). But will the progressive transQpeople go over the rainbow with the GOP? Reaction to BJ's coming out (as a Republican) has not been positive but not to worry, even NatReview has his backside. We will overcome!

I think KK says it best in her interview with Matt Lauer today on Today and really sums up
Transgender Nation's ideology.


"I don't know what life would be like if you always felt like you weren't yourself," Kardashian said. "As long as he is happy, and he wants to live his life, however he wants to live it, that just makes me happy. And I support him 100 percent."

Much better to not BE yourself than it is to not FEEL yourself - That's the Clown Motto.