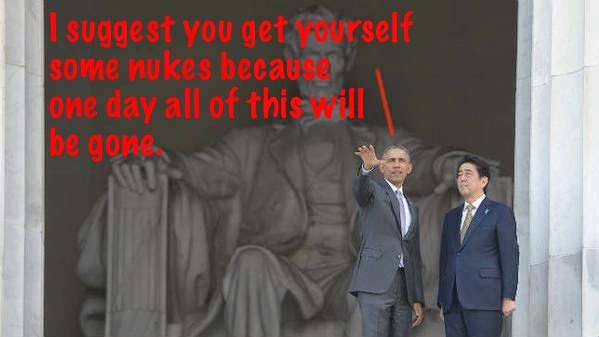 Japanese Prime minister Shinzo Abe is making the rounds talking about women's rights and such and yesterday he arrived in DC to catch an Orioles game (too bad, canceled) and to talk about emojis with the Prez.

All good with Nippon, the Mori Faction, and Japan's Liberal Democratic Party (which, over there, means  sort of the opposite of what it means in the USA). But I think the nationalist Abe is trying to find a way to get his island "back in the game" as they say. And he just might have found the guy who'll let him do it...

State Media reports on the goals of this weeks visit

One of the first things the two allies will do is sign an updated defense agreement that, among other things, would allow for Japan to respond militarily should U.S. interests be attacked. That's important given concerns over North Korea's nuclear capability and China's rising military prowess.

Since World War II, Japan has had a pacifist constitution, which has constrained its military. Abe has been seeking to ease restrictions on the armed forces, Goto says.

The Council on Foreign Relations puts it this way:

He, you know, established an NSC.  He passed a new secrecy law.  He's upped the defense budget.  He has a new national strategy.  But one of the core pieces of the Abe cabinet's reform has been the announcement last summer of the reinterpretation of the right of collective self-defense.

And so, when the Japanese refer to the right of collective self-defense, they're really talking about the Japanese military's ability to work alongside other national militaries, including ours.

And so, up until last summer, the — the consensus in Japan was that the self-defense force shouldn't operate alongside us, that that would violate the spirit of the constitution.  And Mr. Abe's government has changed that.