February 19, 2015
The 0-postate decided to lecture ISIS on their religion again today but I don't think they're listening - If the Beebs is questioning the effort will the head hackers get with the program? I'm skeptical.


"They try to portray themselves as religious leaders, holy warriors. They are not religious leaders, they are terrorists." (that's why I drone them and bomb them, however)"Muslim leaders need to do more to discredit the notion that our nations are determined to suppress Islam."(because) "It is a lie... We are not at war with Islam. We are at war with people who have perverted Islam." (you see) "Terrorist groups like Al-Qaeda and ISIL  deliberately target their propaganda in the hopes of reaching and brainwashing young Muslims," (using) "high-quality videos, the online magazines, the use of social media, terrorists Twitter accounts - it's all designed to target today's young people online in cyberspace".

I know it's confusing - why does he keep using ISIL when he's talking about Islamic State? Doesn't he know that al-Qaeda means "the base" in Arabic? Luckily the DHS has set up a website to help combat this virtual scourge that's messing up cyberspace. I'm glad the President and other world leaders are focusing their attention on the virtual world and trying to clean it up from terrorist propaganda. No one want's to surf the web looking for something to buy or watch and get confronted by terrorist acts - it's really a buzz kill. So let's stop it cyber citizens!!! - and that goes double for you brainwashed Muslims who don't understand your religion. 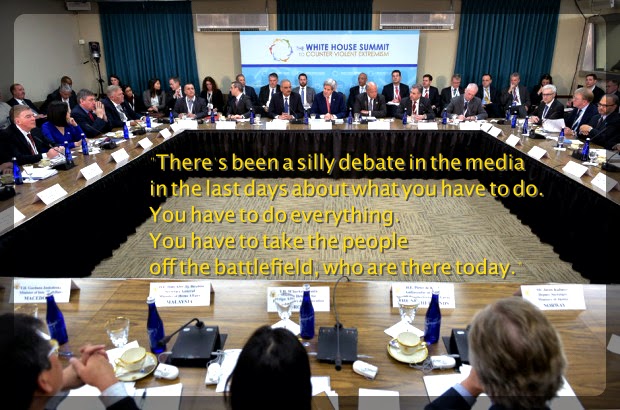