Joel Krupnik will get coal in his stocking 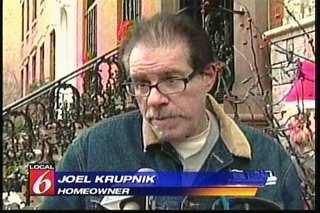 What kind of sociopath puts a bloody Santa Claus in a tree in front of his brownstone?
Joel Krupnik - that's the kind. With a name like Krupnik you can imagine the ridicule he has been subjected to throughout his life. The mockery must be especially intense during the Yuletide season - a season that celebrates St. Nick, the jolly old elf, but Joel looks in the mirror and sees a bland, misguided fool named Krupnik.

You've made the Christmas season a little bit uglier Joel - Ask not for who the bell rings, it rings for you - Clown!

travisingals14488054 said…
Make no mistake: Our mission at Tip Top Equities is to sift through the thousands of underperforming companies out there to find the golden needle in the haystack. A stock worthy of your investment. A stock with the potential for big returns. More often than not, the stocks we profile show a significant increase in stock price, sometimes in days, not months or years. We have come across what we feel is one of those rare deals that the public has not heard about yet. Read on to find out more.

Nano utilizes Arc Bond Sputtering and Superlattice technology to apply multi-layers of super-hard elemental coatings on an array of precision products to achieve a variety of physical properties. The application of the coating on industrial products is designed to change their physical properties, improving a product's durability, resistance, chemical and physical characteristics as well as performance. Nano's super-hard alloy coating materials were especially developed for printed circuit board drills in response to special market requirements

The cutting of circuit boards causes severe wear on the cutting edge of drills and routers. With the increased miniaturization of personal electronics devices the dimensions of holes and cut aways are currently less than 0.2 mm. Nano coats tools with an ultra thin coating (only a few nanometers in thickness) of nitrides which can have a hardness of up to half that of diamond. This has proven to increase tool life by almost ten times. Nano plans to continue research and development into these techniques due to the vast application range for this type of nanotechnology

Online Stock trading, in the New York Stock Exchange, and Toronto Stock Exchange, or any other stock market requires many hours of stock research. Always consult a stock broker for stock prices of penny stocks, and always seek proper free stock advice, as well as read a stock chart. This is not encouragement to buy stock, but merely a possible hot stock pick. Get a live stock market quote, before making a stock investment or participating in the stock market game or buying or selling a stock option.
10:34 AM

mandyerickson5913 said…
I read over your blog, and i found it inquisitive, you may find My Blog interesting. My blog is just about my day to day life, as a park ranger. So please Click Here To Read My Blog
3:38 PM