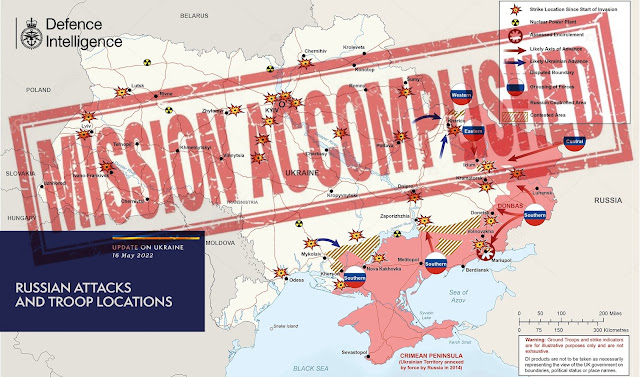 I love to read Caitlin Johnstone over at Medium because, aside from being a commie, she is right about almost everything and a prolific writer. So when Geo. W. Bush bragged about his call "to launch a wholly unjustified and brutal invasion of Iraq" during a speech at his presidential center in Dallas I just had to go read her assessment of the moment. She didn't disappoint, claiming that Bush's Freudian slip/confession is "the single best thing that has ever happened" (W"s malapropism), sweet Caitlin goes for the Adam's apple:

The bullshit doesn’t get any more brightly illuminated than this, folks. All that spin and narrative management they’ve been pouring into the US proxy war in Ukraine, and Bush undoes it all with the Bushism to end all Bushisms.

The girl's got a point. Bush wasn't even supposed to be talking about Iraq - he was talking about Putin and his "wholly unjustified and brutal invasion of Ukraine." Those are the words that were written on the script so why did W slip in yesteryears hotspot and pop the Blue & Gold balloon.  More importantly, GWB was talking about Putin's belligerent tyranny in the context of election integrity which was the theme of the event Elections — A More Perfect Union presented by The George W. Bush Institute, the Partnership for American Democracy, the Corporation for Public Broadcasting, the American Academy of Arts and Sciences, and the Karsh Institute of Democracy at the University of Virginia. For someone like me who is convinced that all US elections are rigged and that 70% of our "representatives" are installed by political shenanigans making the majority government illegitimate this is four (4!) hours of torture administered by John Bridgeland, Jon Meacham, Yuval Levin, Michael Carney, Joanna Lydgate... please, make it stop... make it stop, I beg you. The former POTUS doesn't even show up until hour three and then stumbles through a deck or cue cards with prepared remarks which, as has been noted, he FUBARs at an epic level that will probably never be surpassed.
Unless he did it on purpose. As 43 sees it, elections provide a "healing" function for our democracy in that they allow We the People an opportunity to stomp a foot and slam a door before falling in the bed and sailing away with Wynken, Blynken, and Nod. He quotes Lincoln's "the ballot is stronger than the bullet" aphorism (tell that to John Wilkes Booth) with absolute conviction before admonishing the audience that "the way countries conduct elections is indicative of how their leaders treat their own people." Example: the Ukrainian people elected a "cool little guy" named "Vladmer Zo len ski" to be the "Churchill of the 21st Century" with 72% of the vote and now, with that electoral "legitimacy" he is bear-baiting with disastrous results for those stupid saps who cast a ballot for him. "In contrast, Russian elections are rigged. Political opponents are imprisoned or otherwise eliminated from participating in the electoral process." That means there are no "checks and balances" in Russia and that allows ONE MAN (Putin) "to launch a wholly unjustified and brutal invasion of Iraq... I mean the Ukraine." Hey, I know he's 75 years old but this Yankee Texan is dropping bombs like he did in his prime almost 20 years ago.
I'm old enough to remember what was going on in the Middle East before George W. Bush was even being groomed for the presidency - back when his dad was running things as VP for the CIA and America was fighting a Cold War with Russia in Afghanistan and Central America. A good overview is provided in "Ghost Wars: The Secret History of the CIA, Afghanistan, and Bin Laden, from the Soviet Invasion to September 10, 2001" by Steve Coll who, even though he's a shitlib IC stooge assigned the task of telling the official 'warts and all" narrative as cover, chronicles many important names and dates from the decades before one inarticulate man decided to launch a wholly unjustified and brutal invasion of Iraq. If you don't want to read the whole book then go skim the PBS Frontline interview of Coll from 2006 and you'll get the picture - there is no "one man" responsible for launching the invasion of Iraq but if there was his name is George Tenet, not George Bush.
Q: George W. Bush gets elected. How does the Tenet personality capture, if that's what happened, the president of the United States?
A: At the time, the principal privilege of the director of the CIA was that if he wished, and if he was in town, he had a daily appointment scheduled with the president, one on one, to provide him with a direct briefing of overnight developments in the world that the president of the United States ought to know about. Tenet used the opportunity in the morning briefing to build a personal relationship with the president.
This "principal privilege" signifies a top down directive from Langley HQ to 1600 Pennsylvania Ave where a block of time is set aside daily to be used at the DCI's discretion whenever he want's to give the POTUS briefings orders. Critics get off on pointing the finger at Clinton or Bush or Obama for the horrible things they did as president - and they did - but all the big decisions were made for them in the Ministries of Truth, Love, Peace and Plenty. No amount of voting can change that unpleasant reality so… cast your ballet and then go back to sleep, let the army fight another war in Iraq Ukraine and have the politicians fund it with $40 Billion of your money.