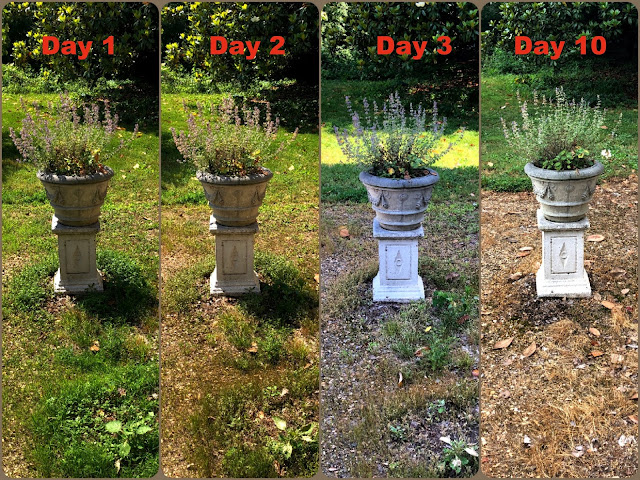 Since I'm the guy responsible for keeping the parking lot and patio weed free, managing the flower beds and, in the late spring or early summer, planting acers of corn and pumpkins I'm a big time proponent of herbicides based on glyphosate like "Roundup". Since I use many, many gallons of the stuff I tend to buy the concentrate 5 gallon containers from Southern States and mix my own brew, but custom mixed or just off the shelf it all works the same -  the glyphosate neutralizes a specific enzyme that plants (any and all plants) use to create the proteins necessary for growth. It's a beautiful and miraculous thing to "watch" it work because the end comes slowly, imperceptibly over time from the moment the weeds are sprayed they start dying and by day 10 they're dead and gone. If you look at the grass sprouting up through your driveway on day 2 or 3 you'd think, "geez, that stuff isn't working at all" but then a week later you wheel the truck up to the house and there's nothing but brown. They say it gives you cancer but isn't that true of most good things in this world?

Modern agriculture would grind to a halt without these herbicides and life around the house would be overgrown with unwanted vegetation. That's because no matter how many times you spray Roundup on the parking lot and how many weeds you kill by retarding their natural chemical process a plant, if you give it enough time, will rise up from the earth. Like any bad idea, a weed - the metaphysical weed - never dies because it is a fundamental part of natural world. We're stuck with it and you can either allow the weeds and vines and ivy to grow up and overtake you or you can cut them down, pull them up and drench them in Roundup. Hard work and sacrifice is what's required to clear the ground, grow food and make the world comfortable for living and Roundup is a relatively painless way of dispatching with unwanted "nature."


Which brings me to a wonderful example of mental and psychological Roundup that got sprayed on the untended garden of American political and cultural life this past July 4th: Speech: Donald Trump Delivers a Fourth of July Speech at the Lincoln Memorial - July 4, 2019. At the time POTUS Trump was delivering this speech I was in the middle of cooking up some burgers and dogs for an Independence Day feast with 20+ family and friends so while several of my guests were transfixed by the message I was busy and only caught a few soundbites on my way to and from the grill and kitchen. Over the weekend I was able to call it up on the Internet and wow, this one was a what is known as Roundup Concentrate Extended Control because it will kill the America hating communist left and keep them dead for a long time.

"Together, we are part of one of the greatest stories ever told: the story of America. It is the epic tale of a great nation whose people have risked everything for what they know is right and what they know is true. It is the chronicle of brave citizens who never give up on the dream of a better and brighter future.
And it is the saga of thirteen separate colonies that united to form the most just and virtuous republic ever conceived. On this day, 243 years ago, our Founding Fathers pledged their lives, their fortunes, and their sacred honor to declare independence and defend our God-given rights. Thomas Jefferson wrote the words that forever changed the course of humanity: "We hold these truths to be self-evident: that all men are created equal, that they are endowed by their Creator with certain unalienable Rights, that among these are Life, Liberty, and the pursuit of Happiness." With a single sheet of parchment and 56 signatures, America began the greatest political journey in human history."

Thus kicks off one of the great short form history lessons ever recorded and one that should be repeated every July 4th for as long as this nation survives because it captures the truth and the glory of our republic. Key passages of this speech should be taught in grade school and memorized by American students. Feature films and television shows should be made about the heros and their exploits so that every soul in this nation and the world could emulate them. This is the kind of patriotic Roundup that should be sprinkled in the minds of American citizens so that it will retard the Marxist enzyme that feeds Communism, Socialism and Fascism (including Nazism) and allows predatory ideology to wither and die. There are other methods of killing unwanted weeds and grass - the old fashion way, before the invention of Roundup, was to spray gasoline in the parking lot and patio - not very safe or ecologically responsible but VERY effective.


Alternatively, one can always resort to "old school" methods of getting down on your hands and knees and pulling these blades of grass up root and all. It's dirty work but some people are cut out for the job and, believe it or not, enjoy it. There is a satisfaction in looking at a basket full of weeds that you've spent hours ripping out of the earth and making your living space more habitable and aesthetically pleasing but it takes a lot of work. A good patriotic speech with a few flyovers takes less effort and I think, in the long run, will have better results. 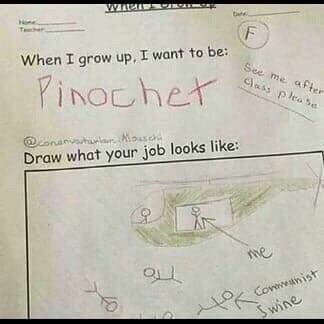