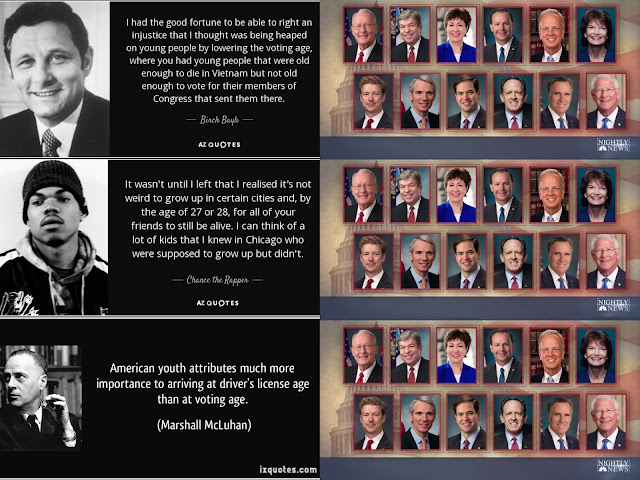 Last Thursday the Senate voted 59-41 to overturn the President's national emergency border declaration and the names of the GOP turncoats are Roger Wicker of Mississippi, Marco Rubio of Florida, Rob Portman of Ohio, Susan Collins of Maine, Lisa Murkowski of Alaska, Pat Toomey of Pennsylvania, Roy Blunt of Missouri, Lamar Alexander of Tennessee, Mitt Romney of Utah, Rand Paul of Kentucky, Jerry Moran of Kansas and Mike Lee of Utah. Senator Portman fears that "a future President may well say that climate change is a national emergency and use emergency authorities to implement the Green New Deal." It's a constitutional issue ya see:

"Declaring a national emergency to access different funds sets a dangerous new precedent," GOP Sen. Rob Portman of Ohio warned in remarks on the Senate floor ahead of the vote. "It opens the door for future presidents to implement just about any policy they want."

This is very, very funny or sick or insane or something but it's doesn't make any sense in the world of Washington DC as it currently exists or has existed since 1976 when the National Emergencies Act was signed into law by POTUS Ford. This Presidential power has been invoked by Clampett, W, and Zed without complaint, without comment (!!!), if you want to be perfectly honest about it, and I would bet that most Americans had no idea that a President of the United States even had this Emergency power at his disposal until Trump decided to use it - or threaten to use it - to build his Wall. If the Congress had simply given the President the $5 Billion he was asking for then he never would have declared the National Emergency and none of this would be happening but what is very obvious as of last Thursday is that there are powerful oligarchs in the USA who don't want border security and they're pulling the strings of their puppets.  Trump can totally do this thing - read the text H.R. 3884 (94th): National Emergencies Act and if the actual text is too complicated for you there is a very clear Summary page with this intriguing entry inter alia:

On 6 March 2014, U.S. President Barack Obama, invoked, inter alia, the National Emergencies Act, and signed an executive order that declared a national emergency and ordered sanctions, including travel bans and the freezing of U.S. asset, against not-yet-specified individuals, later to be determined by the Secretary of the Treasury (in consultation with the Secretary of State) who had "asserted governmental authority in the Crimean region without the authorization of the Government of Ukraine" and whose actions were found, inter alia, to "undermine democratic processes and institutions in Ukraine".

Was Rob Portman a Senator in 2014? Why yes, yes he was and yet this "Constitutional Conservative" had no problem with a former President declaring Emergency Powers "among other things" which authorized travel bans and the "freezing" confiscation of assets of people who are not even identified (!!!!!!! - might not even be known at the time of the executive order) if their actions are found, by the Sec of Treasury, to "undermine democratic processes" of a foreign country. Is it just me? Am I the only person who reads this stuff and finds it objectionalable at the deepest possible level that elected representatives - in this case Senators - are this cynical and dishonest? It's the way of the world I suppose, but I guarantee that you will not find this issue raised on any other news or opinion site on the internet.

The next day, Friday, POTUS Trump vetoed the stupid congressional resolution and that news killed former Senator Birch Bayh who was born a Hoosier but died a denizen of the swamp. For any "Constitutional Conservative" like Mike Lee or Rand Paul worried about this new breed of democratic "socialist" like AOC or a progressive RFK doppelgänger like Beta 0'Leprechaun they shouldn't get too worked up because there was a time, 50 years ago, when these types held the scepter of power and crafted laws that effectively dissolved this country. Birch Bayh was one of those people - the real deal one might say - a boxer, a fighter, a committed progressive and a man's man of the Left and seriously White. He's wrote and passed the amendment (#25) that allowed the DOJ to plot for Trump's removal from office on mental health grounds and he wrote and passed the amendment (#26) that lowered the voting age to 18 - not good enough, now the Dems want to lower it to 16!!! And those are the two amendments that passed but he worked tirelessly for two other amendments that failed but would have hurt America even more. The first was the Equal Rights Amendment which failed but is still pending so Bayh pushed Title 9 in its absence allowing college coaches of obscure female sports teams to sell admission tickets to selected bidders. The second was a pernicious and never ending attack on the Electoral College aimed at mothballing the archaic 18th Century framework and replacing it with direct popular vote for electing a POTUS. That is a way of changing a Constitutional Republic into a People's Republic which is what these Left-wingers are after when you clear away all the black lies and pretzel logic.

The Democrats are getting very “strange.” They now want to change the voting age to 16, abolish the Electoral College, and Increase significantly the number of Supreme Court Justices. Actually, you’ve got to win it at the Ballot Box!
— Donald J. Trump (@realDonaldTrump) March 20, 2019

The problem is this - It's not a new problem. The Dems aren't "getting very 'strang'" because they've been "strange" for 50 years (or longer).  The "leaders" in Washington DC don't care about the Ballot Box and they haven't cared about it for a long, long time. Birch Bayh didn't care about the Ballot Box because deciding things democratically is often the worst way of making a decision from a ruler's perspective. Oh sure, they'll talk up democracy but only if they win and they have to win - they have to be in charge and if they are not then they will burn the country to the ground. That's what they did in 1860. So when the GOP prudes start wringing their hands about the Constitution and how President Trump can't do something that other presidents have been doing for decades with impunity because it might (might?!) run against strict constructionist ideology and practice I have to laugh. The opposition doesn't even believe in representative democracy to say nothing of the Constitution (which they despise) and the ONLY way they will put up with any of it is because they always call the shots - at least they did for 80 years until 2016 - but now that they don't run the show all bets are off. They want to destroy it all and rip up the foundations, tear down the walls and remodel based on their maniacal designs. It's nothing new, it's what they've always done and it's what they always will do.