Just a cheese-dog in Margaritaville 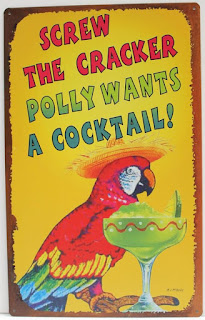 30 years ago I was strolling down Chestnut St. in San Francisco with a friend and we past one of Jimmy Buffet's Margaritaville restaurants which was packed with Parrothead's eating and drinking and doing whatever it is that Parrothead's do. My buddy quipped that in a just world the song "Margaritaville" should play in an infinite loop inside the bar from opening to last call with no escape or diversion for the pasty patrons who spend good money to eat and drink (especially drink) at a prefab fantasy establishment created by Margaritaville Holdings LLC (a subsidiary of Cheeseburger Holding Company, LLC) based in Orlando, FL. If you've ever been in one of these places you'll know exactly what he was getting at because they are a physical manifestation of Jimmy Buffet and, more to the point of this blog post, America's flaccid penis - especially the STD's dripping off the end and moving ever so slowly toward Cuba. "Wasted away again..." and selling a lifestyle brand to mobs of people who not only listen to his insufferable music (and know all the words) but buy into the fake 20th century pirate ethos he's been selling in South Florida for the past 50 years while building a mega hospitality empire that's so garish it shocks the senses and mocks any notion of taste. But that's just my opinion so let's go to the Internet and listen to the voice of the people and see what they have to say about the Son of a Sailor. 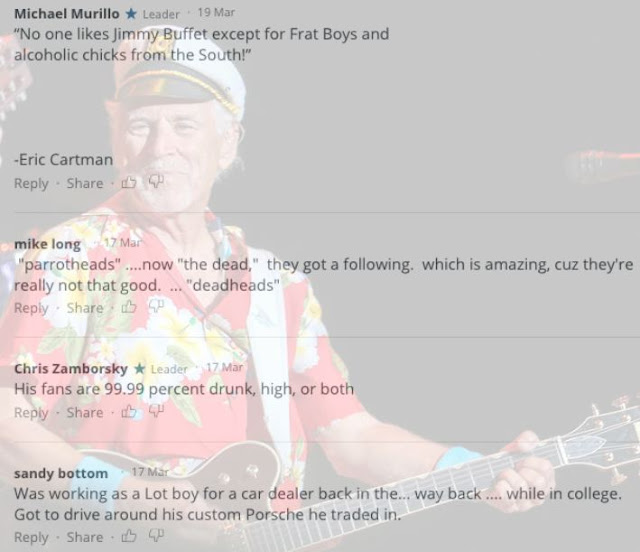 So I'm not alone, but the only reason I'm writing about him is this headline: "Jimmy Buffett to perform free concert for candidates Andrew Gillum and Bill Nelson" which screams "help me" and does not instill confidence for Democrats in Florida.

Gillum hopes an hour or so of oldies like “Margaritaville” and “Fins” will provide enough “Changes in Latitudes, Changes in Attitudes” to propel him to victory over Republican Ron DeSantis in the Nov. 6 midterms. Or, at the very least, to help “energize Democrats and Parrot Heads across the state,” his post read.

If A. Gillum has to roust Jimmy Buffett from his Palm Beach hammock to put on his flip-flops and drive across the bridge into West Palm to excite the geriatric Parrotheads into shuffling down to the polling station and pulling the lever for a (D) - any (D)! - then he's losing and he knows it. Don't believe the hype on TV News or the latest public polling because this is not the last minute play of a confident candidate. For a committed "Progressive" like Gillum to be yoking himself to a multi-millionaire like Buffet presents the same conflict that afflicted the Broadway production of "Escape to Margeritaville" - Inauthenticity as chronicled in the pages of the NYTimes earlier this year: Jimmy Buffett Does Not Live the Jimmy Buffett Lifestyle.

It's all a big fat cheeseburger in paradise lie. That's the problem with all these pseudo-Socialist candidates the Dems are foisting on the electorate and it goes back to Obama who for all his talk and suspect associations was just looking out for the Jimmy Buffett's of this world and making their life better at the expense of everyone else. They're not authentic - it's all a con and the American people know it. "I believe... but" are the words of an disillusioned agnostic who's going down.

I believe that we will win—but only if we vote.
— Andrew Gillum (@AndrewGillum) November 1, 2018