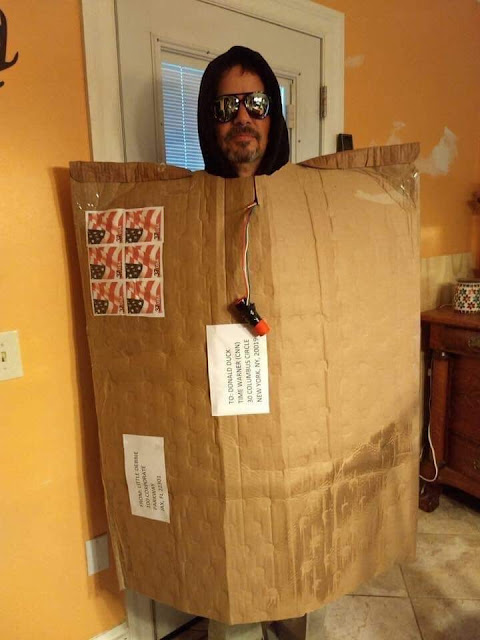 I’m not actually a mad bomber but I am a Trump supporter and, for several years, I drove a white van which is a great way to roll by my estimation and should be lauded - not insulted. Easing into the captain’s seat of your van is like leaning back in an Archie Bunker wingback where you can watch the world pass by from the comfort of your living room which is exactly what a proper Van is but with wheels. Mine was an F-150 conversion with a fold down bed in the back and awesome sound system, TV and PS2 game console + blinds and curtains to afford privacy from the outside insanity of the open road. A Shagg’n Wagon ain’t for everybody, but for those who’ve navigated America’s highways and byways in the spacious comfort of a portable living room there really is no going back to the claustrophobic mobile coffin of an Acura, Torus or (even) a BMW. So it might be partisan pigheadedness or just a brotherhood of the road but I’m still not buying this crazy bomber Cesar Sayoc story which looks to me, for all the world, like a classic psych-ops play from the IC manual in Langley. I know it’s just my gut, but something doesn’t smell right about it and I refuse to even put in my mouth much less swallow.

Too many “whys” with no good answers like:
I claim to understand a bombers mind in that the KOTCB blog is, if nothing else, a collection of lighthearted psychological thought bombs targeting clowns like the Clintons, the Obama’s, Robert DeNero and the like with no particular skill and no idea if they’ll ever actually work (though mine are designed to “go off”). So I think I know what I’m talking about when I say that Cesar Sayoc was probably as surprised to learn he was the mad bomber in the news as I was but it’s not like he can plead innocence with a record like his and that’s the whole point of using someone like him for a black hat operation.

It reminds me of the sad case of Nakoula Basseley Nakoula (AKA Sam Bacile) the creator of a crudely produced video titled "Innocence of Muslims" which hit YouTube in July of 2012 with zero impact but was mysteriously dubbed into Ariabic in the ensuing months and re-released in September just before long planned 9/11 protests erupted across the Arab world in response to the Arab Spring/Arab Winter which had inflamed religious wars between Sunni and Shia Muslims. Some folks still remember the Benghazi attack from that 9/11/2012 but most people have forgotten the breached walls of the US embassy in Egypt or the rioting at consulates and other American outposts throughout the Middle East and Asia all of which was blamed on poor Nakoula and his video. This ruse was perpetrated by the Obama administration and HRC's State Dept. and the #FakeNews scum carried the black water for months until the 2012 presidential election was in the bag and their team won. Susan Rice went on every Sunday news show and promoted this preposterous straw man video which every "journalist" swallowed hook, line and sinker and HRC even recorded a video apology for Americas first amendment rights to the Muslim world. Nakoula was arrested (no bail) and put in prison for a year - not that anyone was interested in hearing his side of the story anyway - until it all blew over and voters had time to forget... forget... forget.

I didn't forget. And when "Michael Moore Reveals Video of Bomb Suspect Amid Angry Crowd at Trump Rally" I remember all over again. Michael Moore, the sebaceous troll who's always sporting a Mich. State Spartans cap, just happened to find footage of Cesar the MAGABomber on his 1000 hours of B Roll stored in some digital landfill in his office. Call me a skeptic if you must but I'd rather be skeptical than stupid.

In his Instagram post, Moore explained he sent a crew that included producer Basel Hamden and longtime collaborator Eric Weinrib to the rally, which took place in the month following Trump's inauguration, not to film Trump himself but to capture footage of the crowds he attracts in order to understand "our fellow Americans, lost souls full of anger and possible violence, easily fed a pile of lies so large and toxic that we wondered if there would ever be a chance that we could bring them back from the Dark Side.”

Ah yes, the "pile of lies" grows larger by the hour - but who is to "bring us back from the Dark Side" if we must rely on even bigger liars than the liars that are lying to us already?