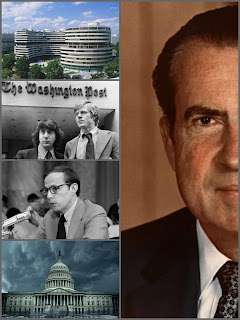 In the history of US political scandals my favorite is the "Whiskey Ring Scandal" for the name alone because there's something very romantic and menacing in the idea of a whiskey ring (whatever that is) which makes a reader put down his coffee cup and pick up the paper. Others, like the Iran-Contra Affair or "Crédit Mobilier Scandal" sound salacious, mysterious and foreign to the average news consumer who doesn't know what an Iranian Contra is and is suspicious of any word with a glyph in it. It must be said that the most appropriately named scandal of this, or any other, time is Watergate because a watergate is a sluice or floodgate that regulates (i.e. controls) the amount of water that flows from one place (like a swamp) into another (like a river or ocean). It is true that Watergate is also the name of a hideous piece of architecture housing apartments and professional offices on the banks of the Potomac River. The Democrats had a campaign HQ there in the 1970's that president Richard Nixon broke into and while he was rifling though the file cabinets a security guard captured him and brought him to justice. He lied about it (of course) but it was obvious from the surveillance video that the president was guilty so, in due course, he was compelled to resign from office. It was not the crime, but the cover up that did Nixon in and that's where the watergate comes into play because someone (or a team of people) actually have hands on responsibility for opening and closing the gate thereby governing the amount of water that flows through it. The watergate is a control point and the water, under normal conditions, flows in one direction which in the case of Washington DC is FROM the swamp TO the rivers and tributaries that nurture rest of the nation.

So when Legal expert Jonathan Turley is questioned by reporter Crystal Ball (no, I'm not making it up, that is her name) about the Michael Cohen plea bargaining and says, "The fact is this has some parallels to Nixon. You have the president's lawyer going south on the president. You have these sort of bombshell moments", I know exactly what he means. These "bombshells" are released through the watergate and manufactured to explode at various depths downstream to inflict damage on the body politic and cause civic strife. It's a coordinated and malicious attack on the POTUS orchestrated by the powers that be in Washington DC - what else is new? It's just like Watergate because all these plays have been just like Watergate since 1972 and weather you're talking about Billygate, Monicagate (what I like to call Staingate) or Pussygate the origin, execution and purpose has followed the same script. Find something (anything) that can be construed as "illegal" or immoral and build it up through the #FakeNews until it's time to release the bombshell and then scream like hell when the explosion goes off and hope that everyone else will start screaming too. Will it result in impeachment? Who cares? It's enough to cog up works and cause consternation in the victims psyche while beating down any voice stupid enough to defend the "guilty" politician in the crosshairs. It's worked like a charm for 40 years but I think we're gonna get a very Trumpian reality check this time and that's for one very good reason.


When WaPo trots out #NeverTrump swish Philip Allen Lacovara to claim that what Trump has done is worse than Watergate you know the watergate is broken and the normal ebb and flow is going in a very unusual direction. This GOP putz served as Leon Jaworski's beard during the absurd CIA coup after the '72 election and gave the patina of bipartisanship to the special prosecutor's office. Now take a close look at this authority and tell me you're buying any of this malarky. 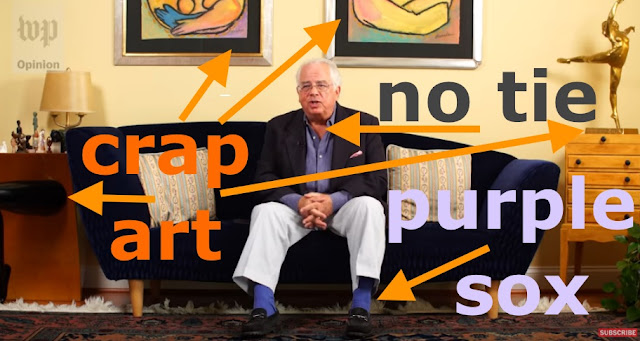 Yeah, it's worse than Watergate - by a long shot. Every corruption scandal is because Watergate was a cruel joke foisted upon the American people by scum who couldn't stand the fact that Nixon cleaned their clock in the 1972 election and were determined to run him out of office before he enacted his policy of New Federalism and handed off the presidency to Ronald Reagan in 1976. In their (the Deep State) twisted mind the Nixon presidency had to be ended so they opened up the watergate and submerged the country in raw sewage. I dare them to do it again. Impeach Trump for having sex with a Playboy Playmate of the Year and a Porn Star. Do it.