Back in the days of my youth the older brothers and sisters seemed to love “Easy Rider” - a film made by and staring Peter Fonda who, like his sister, made the best of their nepotistic opportunity often afforded the offspring of Hollywood A-listers. It’s a great gig if you can get it and provides the star or starlet A LOT of leeway to do whatever the hell they want to because big daddy always has their back. So if you want to make a movie about two miscreant dope smugglers making their way across the fruited plain - sort of a “Grapes of Wrath” in reverse (because the story travels west to east)  - then by all means, do it. They’ll find you the money to make it and, more importantly, sign a distribution deal to actually get your “product” in front of as many eyeballs as they can. “Say, what is it again that we’re selling?” Answer: just a bunch of nehilistic bullshit that runs down the American Dream and shows the youth what a backward-ass country this is and how it deserves to be overthrown by violent revolution or, at the very least, by soft cultural revolution. “Oh, great, that will sell!!! People who watch movie hate our country.” And it was a hit, so to speak, giving Peter Fonda, Dennis Hopper and Jack whar’s-his-name a big time breakthrough. The rest, as they say, is history.

But then the Internet came along and screwed it all up.

Peter Fonda apologized Wednesday for a late-night Twitter rant in which he suggested 12-year-old Barron Trump should be ripped from "his mother's arms and put in a cage with pedophiles." The all-capitals tweet in the wee hours went on to call President Donald Trump an expletive. The actor later deleted the tweet and drew sharp rebukes from first lady Melania Trump and Donald Trump Jr. 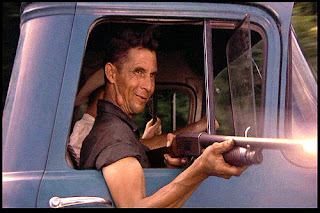 Wow! He called POTUS an “expletive” - unbelievable. I still hold to my proposition that NOTHING anyone says on Twitter should be taken seriously because it’s almost always just impulse rants and bad jokes but I do love the way tweets show whats actually goes on inside the mind of a Knight of the Golden Circle “in the wee hours” after watching hours of #FakeNews toxic poison. It’s kind of sad. My favorite Easy Rider stories are the ones that recount how some audience members stood up and cheered the final climactic scene when the anti-heros are blasted from the saddle of their iron horse by concerned citizens with a shotgun who rightly identified the two hippies for the threat to civic order and social harmony they represented. As Peter Fonda lay dying on the side of the road these fine people saw ruthless justice delivered and the 90 minutes of debauchery and sickness they’d just sat through finally made sense. Not what the director intended but sometimes art takes on a meaning all it’s own and leaves it’s creator scratching his head and wondering what he was actually trying to say in the first place.