The Prison of Hope

In times of turmoil I find myself turning to our Supreme Leaders Little Red, White & Blue Book, which I received from Santa Claus this past Christmas, and searching for answers as only he can give them. And there, on page 58 of Sh*t Trump Says (The Most Terrific, Very Beautiful, and Tremendous Tweets and Quotes from our 45th President) I found this from 1999 when F*ckface Von Clownstick (who is not a politician) toyed with a presidential run on the Reform Party ticket at the request of Jesse Ventura.


"I think the only difference between me and the other candidates is that I'm more honest and my women are more beautiful."
Interview with The New York Times November 17,1999

Prescient words from our future POTUS and it is at this point that I ask you, dear reader, to indulge me in a little hearsay relayed to me by a friend of a friend who knows Hope Hicks from childhood and communicates regularly with the former Communications Director for the Trump Campaign and The White House. To appreciate this scoop I'll incant and conjure the generic political environment circa the Autumn of 2015 when there was much speculation about what, in fact, Trump was actually trying to accomplish in his presidential run since there was not a chance in hell that he would win the GOP primary - to say nothing of the general election - so there must be some alternate motive for DJT to joust with these windmills. Sure, he might be up in the poles right now, but it was only a matter of time before the American public came to their senses and dismissed this showboat as a naughty infatuation before walking down the isle to put a ring on Hitlery or JEB! like they were supposed to do. No one - and I mean no one - imagined that We the People would earnestly get behind the Trump candidacy and MAGA because, in the minds of the political establishment and MSM, a Trump presidency was impossible. This was a time before that same political establishment became #NeverTrump and that same MSM became #FakeNews and everyone was simply enjoying the show - the warm up act as it were - before the main event which commenced with Iowa and NH primaries. Trump was regularly invited onto MSNBC @MorningJoe to yuk it up with Joe and Mika, happily given airtime by CNN which covered his rallies like they were WWF main events, every Trump Tweet was amplified by the politicians and media 10,000 times because they were shocking, irreverent, politically incorrect and, after all, where's the harm because this Billionaire Real Estate developer and reality TV show host has a 20% ceiling (at most) of support. That was then and that was the mood - the conventional wisdom - in which Hope Hicks was asked the pointed question by her longtime friend who wanted an honest answer: "Why are you doing all this work for Trump and what do you think is really going to happen to his candidacy?" As has been relayed to me, Hope's reply was matter-of-fact and contained a hint of incredulous dismay at the questioners presumption - "We're going to win." Yeah, we're going to win dumb-ass - that's why were doing all this bullshit, organizing rallies, talking to these scum journalists, wrangling with the GOP old guard and keeping the campaign committees from flipping out, laying out lots of green on ad buys in far away states, playing this fucking game that nobody in there right mind would get into if they had any other way of making a buck. And we're going win. 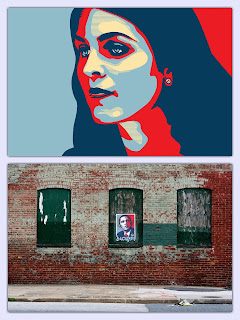 For Trump, Hope is not some gauzy idea or campaign slogan used to bamboozle a gullible and lazy voter - she's  a real live beautiful woman who believes in him. There's a big difference between putting your faith in Hope and having Hope put her faith in you and that's the difference between captivity and freedom. It is axiomatic that hope is the opposite of fear but like almost all axioms it is both true and false and that's because the hope/fear double helix wraps this mortal coil like a snake composed of dreams and nightmares. Neither our hopes or our fears  are materially true but they trap our mind with equal strength, cunning and ruthlessness. It is common to hear politicians and preachers advocate "overcoming your fears" because fear is bad (and might prevent you from doing what they ask you to do) but it is a rare event for anyone to recommend that you "abandon all hope" so let me do that now. FDR famously said, "the only thing we have to fear is fear itself" (so get out of my way and let me implement my New Deal) but that's not the only thing we have to fear - we also have to fear hope. Hope can chain you to a dream that will never come true and probably never should come true - worse, when it seems that your hopes will not be realized, most people will dash them preemptively because they fear losing that hope. Do not fear it - embrace it.

Let's consider basketball - When the NCAA Basketball season started the University of Virginia Cavaliers were not even a ranked team. No respect for their game by the sports writers and coaches so they get left out of consideration last October but by the end of last week they were ranked #1 in the country when they traveled to Louisville, KY to play the Cardinals in a season road game wrap. Louisville (ranked #16 in pre-season) desperately needed to win to salvage their season and make a bid for the NCAA tournament known as March Madness so they came to play and punched the Wahoo's right in the face early and lead for most of the game. It was one of those games where everything went right for the home team and everything went wrong for the visitor - The Cardinals couldn't miss a shot while the Cavaliers couldn't buy a basket, rebounds, turnovers, penalties, everything was going against the Nations Number One team but they kept on fighting and amazingly UVA pulled to a tie in the final minutes of the game (after basically having their ass kicked for the fist 37 minutes). Then this happened - the Cardinals sunk a free throw with 5 seconds remaining in the game to go up by 4 points and the game was over. O-V-E-R!!! No possible way to win the game. Period. Hopeless - beyond hopeless - abandon all hope and just play which is exactly what Ty Jerome did. As a result he got hacked on a "what the hell" 3 point shot, sunk two of his free throws and UVA go a lane violation on the 3rd (still down my 2 points with 0.9 second on the clock) and Louisville gets the ball. Did I say hopeless already? But Louisville travels on the inbound pass and UVA gets the ball - WAT? So Ty Jerome tosses it to freshman De'Andre Hunter and this happens:


My point being that UVA would have never won if they'd had a hope of winning - they tossed hope to the wind and jammed the rock right through the hoop. Today Louisville got their chance at redemption in the ACC tournament when they played Virginia again but UVA crushed them 75-58. Hope is a prison so let her go and free yourself to win.