October 30, 2017
I know the news cycle is pretty fast in the Twitterverse but when you consider all the ink and bits spilled over the antics of Rep. Rep. Frederica Wilson (Dumbass-FL) it makes you wonder, where did this bitch disappear to? One week she's all that anyone is talking about and now, poof, she's gone. I think Rex Tillerson might be responsible for the magic act the media performed in whooshing the rodeo clown off the national stage because his tweet distilled what was going through the mind of every sentient citizen of this great republic every time they saw the Gold Start widow story splash across their screen.

This tweet was in answer to some snarky question (since removed) about our Sec. of States former job as CEO of Exxon and the companies current dealings in the landlocked African nation of Chad and it's oil reserves. It helps if you know some humorous 5$ whore jokes that are commonly told in Texas but even without the resonance of this allusion the point is explicit and profound - who in their right mind would elect this woman to represent them in the United States Congress? More importantly, what kind of political party would push this woman UP the ladder of success to be in a position to even get a single vote? One lead by Tim Kaine, that's what. Florida's 24th congressional district has 745,862 people living in it and the best person Tim Kaine (and Debbie Wasserman Schultz after him) could find to "represent" them was this showboat? She's a hack and everyone knows it except Don Lemon who planted this #FakeNews story on CNN in collusion with All Hat Fred and dragged this poor widow through the mud. Team Trump hit the jackpot because all they had to do was call Rep. Wilson an liar and, boom, she's on the air for a week making a daily fool of herself and, by extension, the Democrat party. The MSM, oblivious as usual, just kept running loops of this cowgirl pontificating like a damn fool, talking racism and digging a psychic hole in the brain of America until, finally, the media+Democrats realized she was doing more harm to their brand than a kneeling football player. Thomas Wictor breaks it all down:

Or should I say almost all because there's something else in Rex's tweet that delivers a mighty blow - Chad is right next to Niger and there's a lot of black gold in that part of Africa.

07 January 2017, Sweetcrude, Lagos — Towards the end of the third quarter of 2016, the Federal Government gave the Nigerian National Petroleum Corporation, NNPC fresh thrust to intensify exploration activities in the country’s frontier basin, with specific concentration in the Chad basin having explored the region for some decades without any success in oil discovery. 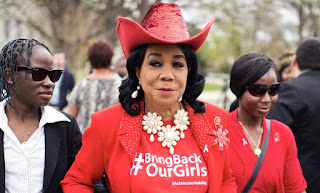 You think Americans have trouble finding Aleppo on the map? Wait until you start talking about Diffa. Wut? Yes, there are terrorists in Africa - Boko Haram is the gang every American probably remembers from the mysterious #BringBackOurGirls campaign of 2014 (not that they were "our" girls but I get it) and the justification for putting boots on the ground (over 1,000 of them now - officially) in Niger. And there we will stay folks. Killing terrorists and watching over that oil for 100 years. Thanks Frederica for all of your efforts to get your constituent, Sgt. La David Johnson, deployed to Niger where he lost his life fighting over oil.