Is now the time for another Peace Conference? 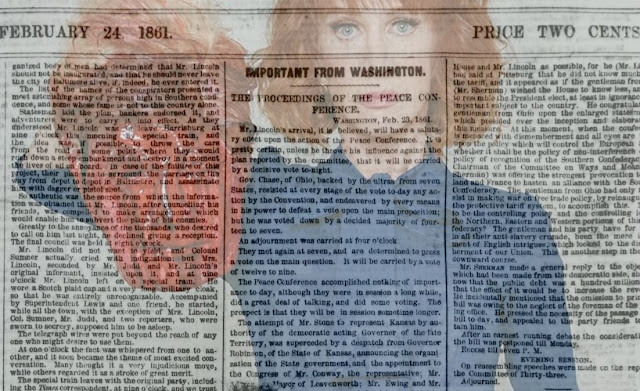 Talking to an old friend over the weekend we began discussing Lincoln's abuse of power and unconstitutional actions during the course of the US Civil War. She was listing the liberties that honest Abe had circumscribed or (in many cases) outlawed during the great conflagration but I cut her off short and explained that, in my view, the war over secession was proof that the American experiment in representative government was a failure and Lincoln had no choice but to watch the South burn it down so that he might rebuild along the same designs with improvements. The issue of contention in those days was slavery, but slavery was just most prominent and visible of a host of secondary issues that supported the peculiar institution - the tip of the iceberg as they say. It was these secondary issues that split the Democrat party and allowed Lincoln to win the presidency with 40% of the popular vote and it was his lot to try to lead a fractured nation. The US congress had been trying to bridge the divide through legislation and compromise for 10 solid years and some of Americas most gifted and inspiring oration in those days is our national inheritance but so is the Civil War. They kept trying right up to the end and convened a Peace Conference just before Lincoln assumed power to work through their differences and, as the name implies, keep the peace.

Try as they might, peace was not to be found and the reason for failure is very simple - because the Democrats lost, they tore the country apart. The Democrats were the majority nationally and won outright in Maryland and Delaware with split majorities in California and Oregon that allowed Lincoln to slip into electoral victories there. The heart of America - Virginia, Kentucky and Tennessee - split their majority Democrats and elected Bell as the compromise candidate. So the Democrats had just cause to be upset over the elections outcome because it was only due to their own infighting and quirks in the electoral college system that allowed someone like Abraham Lincoln to assume the seat of power. The Democrats had run the show since 1800 and in that time they had become fat and happy and entitled to keep on running it forever. Slavery and the threat of emancipation had given them the carrot and stick required to drive voters to the polls and build a decadent and un-American meta-culture that mocked the spirit of the US Constitution. It was that massive tide of popular will and prideful indignation that swept up from the South and crashed against the banks of the Potomac River only to meet the righteous wall of Lincoln.

Today it is abortion on demand and illegal immigration the Democrats use as touchstone issues to ignite the passions of their followers and, like slavery before them, both are extra-constitutional lies justifying a much deeper and more corrupt form of government. There is no compromise from the Democrats on these "rights" and many of the same arguments put forward by the Democrats of 1860 are used to defend these modern day abominations of justice. As a political tool, finding a practical but immoral practice and then defending it's practicality in spite of its immorality is a winner. Voters are nothing if not practical and if they feel threatened with the loss of a practical "good" or easy, cheap labor they will throw morality out the window. And, of course, many voters have no morality to speak of in the first place but there are not enough of them to win elections without dragging the moral compromisers along with.

So it is probably time that level heads in congress convene another Peace Conference because we must learn to compromise and get along. The option of initiating a civil war is off the table - the NSA and surveillance state will kill any such effort in the crib and the Democrat rebels don't have the guts or guns to pull it off anyway. So we need statesmen to come together from both parties and find a way to give up and give in to the new Trump reality and put America First because some Democrats are willing to tear it all down again just because they lost and wont get their way.