The hints have been dropping since the inauguration but now the day of atonement is upon us and my guess is that this thing is about to get real, real fast. Until now the knife fight has been shrewd with many lunges and feints - solid blows landed by both sides but eventually they were going to get close enough to grab each other by the neck and kill. The NYTimes set it up on Monday with Five Key Questions as a Government Shutdown Looms which was the high sign to everyone able to read between the lines that this thing is going to happen. While folks on the news shows and web sites were talking about NORKS and Ivanka the Hill and WH have been prepping for the shutdown. Pulling funding for the boarder wall, keeping funding in for Planned Parenthood and whatever "concessions" Trump made were simply tactical moves to pull talking points off the Democrats (and by extension the media's) page. Then Trump took the proactive step of  tweetstorming the Dems and letting them know what they'll get for the next... well, who knows how long?


As families prepare for summer vacations in our National Parks - Democrats threaten to close them and shut down the government. Terrible!
— Donald J. Trump (@realDonaldTrump) April 27, 2017

It could be Labor Day before the government reopens. Don't believe me? Here's how the NYTimes explains it:


Republicans in Congress appear keenly aware that a shutdown would be blamed largely on them, despite Mr. Trump’s attempts to shift responsibility to Democrats.
And while many are unlikely to say so publicly, some Democrats would plainly relish the political upside of a unified Republican government ushering in Mr. Trump’s 100th day by failing to keep the lights on. 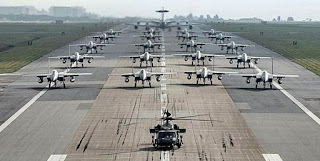 Yeah, "some" Democrats would like to give Trump a black eye on his 100th day in office and that's exactly what "some" Democrats are going to do. The truth is that it really doesn't matter who relents on budget priorities and who doesn't because this deadlock isn't concerned with finding a way to work out differences and fulfill the will of the people (or the will of anyone) - it's a decision to stop Trump cold and wipe out his presidency. A battle of wills and a test of who can be more cunning and ruthless. My money is on Trump, but I have to admit that the Democrats have everything to lose - this is their last battle for the foreseeable future if Trump wins so they'll probably fight with everything they've got. Unfortunately for them Trump has more than a Twitter account these days - he's got Tomahawk missiles, MOAB, ICBMs and other stuff to throw at crazies all over the world. I think the jets will be flying over Syria and North Korea soon - (and while you're at it president Trump, would you please drop a few bombs on Venezuela).


The Elvis from Queens will bring them to their knees and make them beg for mercy. Beg and weep and rend their garment offering anything - ANYTHING - if he will just open their Government again. "For Christ's sake Mr. President, it's already October and the US Government is still shut down! We've offered to fund the boarder wall. We've defunded Planned Parenthood. We've let you fire the Ninth Circuit. We've torn up the Iran deal. We've repealed and replaced Obamacare. What else do we need to do to satisfy your demands? Please Mr. President, please... have mercy... forgive us...".