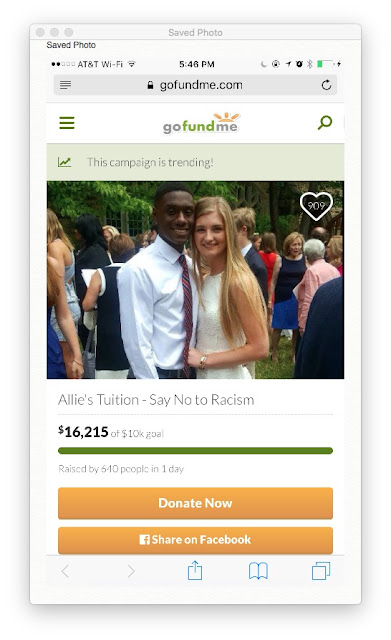 Yesterday I was having a tasty taco lunch with my daughter at Al Carbon in the Woodbrook Shopping Center (best tacos west of the I-5) and a very funny snapchat blinked on her phone about Allie Dowdle and her GoFundMe effort to "Say No to Racism." Allie attends Hutchison School in Memphis, TN and my daughter knows an alum from that fine institution who forwarded the electronic tin cup to her not because she expected my daughter to contribute but just for giggles. Supposedly the Hutchison community, and all of Memphis, is freaking out about this drama and when we checked in Allie had already "raised" $2,500. At 5PM ET tonight Allie had bilked internet innocents for over $16K and her effort is trending so there's probably more greenbacks coming. Not that she's unappreciative - "Even the smallest amount helps. I cannot express how much your time and money means to me."

All of this because Allie fell for a black guy named Michael Swift (no, I'm not making that name up) and her parents flipped out, demanded she stop seeing him and cut her off when she didn't comply with their wishes. She's 18 and they're not legally required to support her so...

She's asking the world for money because in her "Coexist and Facing History and Ourselves" world view she DESERVES it. Just going to her fellow classmates at Hutchison she could probably find 100 girls who have a spare C-note tossed on their dresser or stuffed in their jewelry box, but she's taking this scam world wide and raking in the cash. Very smart and shameless - I'm going to keep my eye on Allie Dowdle because I think she'll go far in life but will probably dump Michael as soon as she gets to college.