Woke up, it was a Chelsea morning

And the first thing that I saw

Was the sun through yellow curtains

And a rainbow on the wall

Blue, red, green and gold to welcome you

We'll put on the day

There's a sun show every second

Chelsea Manning's treachery put American lives at risk and exposed some of our nation's most sensitive secrets.

In a America we have a concept called 'Civilian Control of the Military' which, though somewhat misunderstood. means that the democratically elected POTUS tells the army what to do. There's a reason he's called the commander-in-chief and that reason is that military leaders do what he commands (weather they like it or not) and live with the consequences. And because it's the military which operates by a very strict chain-of-command model the presidents orders trickle all the way down to lowly privates at Fort Leonard Wood or some shack in Iraq or anywhere else the US fighting force might be opening up a can of whoop-ass on this globe. If the leader of the free world decides to integrate the army, drop an atomic bomb, fire a decorated general, overthrow a government, carpet-bomb on Christmas, shoot down a satellite, allow for homosexual soldiers, put women in the trenches or pretty much anything else - it gets done STAT. The truth is that the Armed Services are probably the best measure of a president's capabilities because, unlike the economy, education and weather, it is the one institution of government he truly controls. 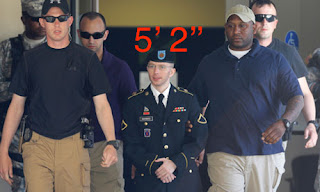 So it didn't surprise me when commander-in-chief Zed decided to pardon Chelsea Charms for espionage or treason or whatever it was the JAG lawyers pinned on her because a fish rots from the head and, in this case, the head knows it. Anyone familiar with the malnourished and abusive life that produced the 5 foot 2 inch gay techno-nerd named Bradly Manning can not be surprised that after a few months of basic training in 2007 the US Army was about to wash this diminutive troll out of the system (where he belonged) but decided to "recycle" him due to his IT skills. In Barack's army this worm was given top secret security clearance and despite physically attacking superior officers was allowed to continue collecting sensitive info and passing along videos and documents that threaten national security - Until he got caught, not by the army but by a hacker.


Some of what caused misery in Manning's life - his broken family, chronic loneliness, his homosexuality and gender-uncertainty - has been reported since his arrest at the isolated Forward Operating Base Hammer, near Baghdad, in May 2010. More sensational was the revelation at his pretrial hearing at the Fort Meade military complex in Maryland of just how much the military knew about his problems - and virtually ignored.

So why was this Manning character "ignored" for so long by so many of his superiors?
Answer: He wasn't ignored, he was purposely evaded because everyone knew that confronting the obvious truth might jeopardize their careers. No lethal military force would have Bradly Manning working for it but in Barack's army if Bradley wants to become Chelsea then that's great because it makes shim feel better about shimself - a delusion shared by many but one for which, in hindsight, FBPOTUS must atone.