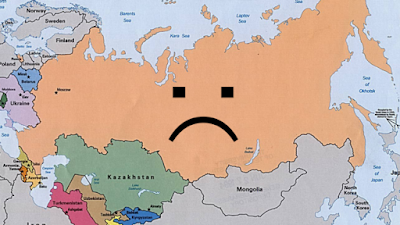 Here in the USofA where anyone (and I mean pretty much anyone) can become a citizen and therefore an American it's hard to get a handle on Russia where nobody just shows up and "becomes" a Russian. The Bear doesn't welcome outsiders into it's den and there's a damn good reason for that which is something else the sugar-water drinking, video game playing, slap-happy simpletons living on the fruited plain can never fully understand. America - The United States of America - is bordered by two relatively harmless countries:


Russia, on the other hand shares a boarder with fourteen (14!!!) different countries, some of them real beauties like North Korea, Mongolia and Kazakhstan, and some of the more harmless countries are just buffers that give traditional enemies like France, Germany Turkey and Japan a highway for them to get a running start when they attack. This geographic reality and long history of fighting for their lives, century after century, from the time the first hardy Vikings first established a unified "country" a thousand years ago up to the present day has created a very complicated and inscrutable personality type.


"If I am admitted and tolerated here," he had said one day, "it is simply because I talk in this way. How can anyone possibly receive such a man as I am? I quite understand. Now, could I, a Ferdishenko, be allowed to sit shoulder to shoulder with a clever man like Afanasy Ivanovitch? There is one explanation, only one. I am given the position because it is so entirely inconceivable!"

The current ruler of this vast empire is Vladimir Putin who, if news reports are to be believed, causes American presidents a lot of trouble and he's now trying to destroy American "democracy" to get his man Trump installed in the White House. How could it be that this horrible person - this former KGB agent who's a bully, a tyrant, a murderer and a lot of other really bad things - be allowed to ruin EVERYTHING (including our election)? If you want to know the why and wherefore all you need to do is read Dostoevsky's "The Idiot" and it will become opaquely "clear." This novel is a sprawling, contradictory morality tale that throws a pure, incorruptible, loving soul (think a 19th Century Barack Obama) into the maelstrom of Russian society populated by Russians - almost all Russian personality archetypes are represented. The idiot, Prince Myshkin, returns to his homeland after spending 4 years in a European sanitarium and over time he's driven to eternal madness (again) by the actions of his countrymen - back to the nut house. The story, the people, the society and culture represented explains the 1917 revolution, the insane (insane to western eyes anyway) Communist regimes of the USSR, the black hole implosion of the Evil Empire and the rise of Putin. They're Russians man - They outbid each other to win the affection of a woman and then that woman will throw the winning bid (100K rubles) in the fireplace, they burst in through your front door drunk and ready to fight and they bring all their drunken friends with them, they run off with your fiancee hours before you're to be married and then stab her to death that night - and then they'll sit and talk with you all night beside her dead body. They get Putin and he gets them.

From Putin's perspective he needs a competent, self assured and "manly" USA active on the world stage. He doesn't want a lead from behind, apologetic and duplicitous competitor (a kind of Super-France) slithering around the globe and fucking everything up all the time. The USA press is blaming Putin for influencing the November election, just like they blame him for everything from invading his neighbors to Syrian genocide, but they never look to the possibility that The West generally, and the USA specifically, give him very little choice in these matters. Is Putin supposed to just let Ukraine take over Russia's only warm weather shipping port or let Syria go up in smoke (along with another Russian naval base) or allow some light-weight crone like HRC become POTUS? Answer: No. Hell no, he's not going to sit back and let any of that happen because he doesn't have the luxury of inaction. He's not sitting on top of a huge, robust, diversified economy with oceans to the right and left, blue stocking prudes above and smiling wet-backs below. He's got the decadent West on one side, 1 Billion+ Chicoms on the other and a roiling sea of psychotic Jihadi scum below - It's serious. It's frigg'n scary man and he can't just keep hitting the ball over the net with nobody there to return service. Putin is not Prince Myshkin (nobody is) but somebody's got to keep a lid on these Russians and thank God Vladimir Putin is doing it.

The Encyclopedia of Philosophy

October 06, 2021
Who voted for this guy? It's been ten days since the results of the Maricopa County, Arizona ballot audit were released to the public and presented at a hearing held by the state senate. This exercise in democratic accountability had been going on for months and, if reports are to be believed, was completed well over a  month before the September 24th hearing where   overwhelming proof of an illegitimate election was presented to lawmakers . The audit showed multiple irregularities, fake ballots, duplicate counts, errors, omissions and egregious acts of sabotage and obstinance by the Maricopa County board of supervisors who did everything they could to withhold and destroy evidence of wrongdoing from the citizen sleuths. The misfeasance of Arizona's political leaders was clearly defined, shocking and (for some) beyond belief but somehow these facts were discovered, organized, packaged and suppressed for MONTHS by the Cyber Ninjas who were attempting to "get to the bottom&q
2 comments
Read more