The projeny of nature’s journeymen 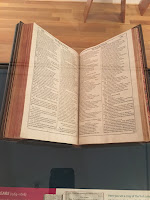 Last week I visited the Albert and Shirley Collections Library at the University of Virginia for a one day seminar and viewing of the First Folio of Shakespeare which is making the rounds in the USA to commemorate the 400th anniversary of the thespians mortality. Dedicated readers for the KOTCB blog know that I am a committed Marlovian but I figured that questions of authorship would not detract from the focus of the seminar which was dedicated to the compilation and publishing of the text itself and incongruities between the Folio and pre-existing quatros published before 1623. The facts about the First Folio are well documented but even the simple stuff raises interesting questions, for instance, why is The Tempest the first play printed in the volume when it's the last play that Shakespeare wrote? I asked the professors, all of whom are Stratfordians, if they didn't find some significance in the order with which the plays were published in the folio? No, they didn't. And then there's this strange fact:


Since we have not found any manuscript copies of the plays written in Shakespeare’s handwriting, the First Folio is the closest thing we have to the plays as Shakespeare wrote them.

As someone who's done some work in the museum and archiving business it seems odd that the originals - the master editions of these plays - from which they compiled and printed the First Folio would not have been saved. Moreover, it seems odd that a playwright would leave no trace of his actual handwriting (save four signatures) on anything - not a contract, not a diary, not a grocery list, nothing - how can a writer (the greatest writer of all time) cast off this mortal coil without leaving any record of his writing? But I digress...

The last lecture was by John Parker and it was very entertaining as he read from quatro and folio to discern "authentic authorship" of the text and highlight sections from the plays that scholars believe to be raw Shakespeare - the 100 proof stuff that wasn't futzed around with by collaborators, editors and typesetters. He ended with the well known Speak the Speech instructions that Hamlet gives to his players before they deliver his cleaver lines in front of the wicked king and queen. As an aside I'll note that here Hamlet refers to the action of the play as a tempest and the play itself as a mirror (Miranda) which I take as further validation of my authorship musings. But then we get to this relevant passage:


HAMLET O, reform it altogether. And let those that play
your clowns speak no more than is set down for them;
for there be of them that will themselves laugh, to
set on some quantity of barren spectators to laugh
too; though, in the mean time, some necessary
question of the play be then to be considered:
that's villanous, and shows a most pitiful ambition
in the fool that uses it. Go, make you ready.

Good advise and words that Donald J Trump took to heart - not in Sundays debate with Hitlery where he strutted and bellowed in his abominable imitation of humanity (to great effect I might add) - but in the pregame boobytrap he sprung on the shitheads who cover the Trump campaign for the media. The look on the reporters faces tells the real story here and I'm sure HRC had the same look of dread and confusion when she entered the debate hall. He got inside her head and marched around her brain in that inhuman gait of his - villanous and rude - and utterly overwhelming her with shame, degradation and well timed one liners.


The real loser, aside from Bill Clinton who finds himself defamed and abused (again) as a result of a GOP dirty tricks smear - for surely it was the Republicans who found and leaked the Billy Bush "hot mic" video to sandbag Trump - that left no option for The Elvis from Queens but to abandon his quest or dredge up the Clintons dirty past and their criminal treatment of Bill's victims, is the Washington DC uber-Government that can't kill Trump off without ACTUALLY killing him. They have done everything they can think of that normally works to weed out the undesirable... scratch that... the unfit nominee but the Clown is still standing and making THEM look the fool. Trump is knocking over the House of Cards (see season 1 and season 2 reviews) and he's still got a month left on his demolition contract - rebuilding will be a arduous task for granny pantsuit if she's able to hobble into the winners circle, and there's still a good chance that America will hire the builder to take on the job and make the renovation complete.