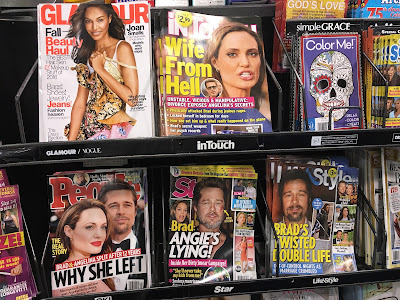 Strolling down the supermarket isle last week I was pleased to see news that the SS Brangelina ran aground and survivors are dashing for the lifeboats while pointing accusatory fingers in all directions. I've had a soft spot for Angelina from my days on the UWS of Manhattan when she would whisk out (I never saw her whisk in) of our apartment buildings lobby after visiting her boy friend (a well known thespian) who lived on the 2nd floor. "Did you see that? Did you know who that was", my doorman would ask. "No, who was that?", I'd ask as only someone who couldn't care less about celebrity and honestly doesn't know can. "That's Angelina Jolie!", says the doorman - eyes wide and incredulous (I mean truly shocked) that I don't have the slightest clue or interest in the young woman's identity. "Who's that?", say I and it just goes down hill from there.

Well, she moved on to bigger and better things than the earnest, well established actor who lived in my building. First by disrupting the fated marriage of Laura Dern and Billy Bob Thornton and dragging that maniacal actor through a three year roller-coaster ride of a marriage that he probably looks back on as the happiest and most horrifying period in a lifetime of debauchery and thrills. After she'd had her way with him, she cast Billy Bob out and setting her sights on larger pray she destroyed the marriage of Jennifer Aniston and Brad Pitt - taking Pitt on a long, strange trip of superstardom and its extravagant lifestyle - a way of living that no human beings have ever experienced (no matter how rich and powerful) prior to late 20th century techno-culture. Frankly, I don't follow them closely so to get the inside scoop I go to the National Inquirer which usually tells the truth in these matters.


Brad and Angie share three adopted children — maddox, 14, Pax, 12, and Zahara, 10 — and biological children Shiloh, 9, and 7-year-old twins Knox and Vivienne. Celebrity divorce attorney Raoul Felder, who is not involved with the couple, told The ENQUIRER: “They have so many financial interests, together and apart, that it could be like two corporations splitting up!”

Got that? Two corporations - This guy and gal ain't even people anymore.