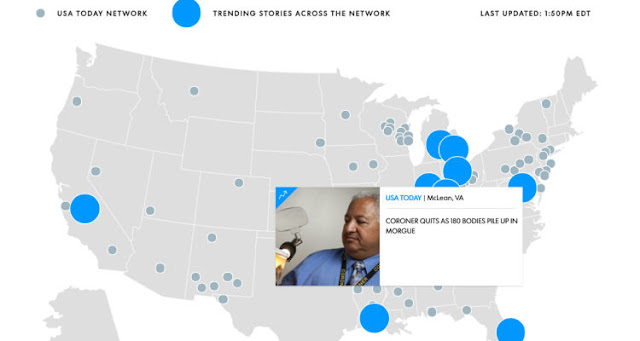 I'm old enough to remember when USA Today launched in the Fall of 1982 with its streamlined content and colorful pages (all newspapers were B&W back then kiddies) which were garish and low-brow - simpleminded you might say. In fact, that's exactly what everyone in the publishing world DID say. You would have thought the world was coming to an end based on the reaction the big-foot media had to this dumbed down news source. It was a dumbed-down news, light on substance and targeted to people (rubes) who read small town regional newspapers like The Brookfield Citizen or The Long Valley Advocate or The Talbotton New Era. It was the Walmart of newspapers that put a lot of small town papers out of business and replaced them with homogenized, centralized, corporatized BlueRedPurpleGreen mush.

Some derided it as "McPaper'' — junk-food journalism for television viewers who didn't like to read. Newsweek once described its founder as "the man who shortened the attention spans of millions of Americans."

It's founder, Allen H. Neuharth, was an interesting character with a bright idea and the fortitude to make that idea a reality.


Newsroom smart and board room savvy, Neuharth was audacious, flamboyant and a self-described "dreamer and schemer." He used all those talents, and a dose of Midwest charm and common sense, to help build Gannett into one of America's largest media companies.

An audacious, flamboyant dreamer and schemer not only created USA Today but lead the Gannett media conglomerate to amazing corporate success in the 70's and 80's - making himself a lot of coin in the process.


Under the leadership of Neuharth, who was named CEO in 1973 and chairman in 1979, Gannett underwent a steady period of growth and diversification.
In 1971 Gannett merged with Federated Publications; in 1977 it merged with the Speidel Newspaper Group. In 1979 Gannett merged with Combined Communications in what was then the largest merger in the communications industry.
With the opportunity for growth came the opportunity for diversification. In 1979 Gannett owned 78 daily newspapers in 33 states and Guam, a national news service, seven television and 14 radio stations, outdoor advertising plants in the United States and Canada, 21 weekly newspapers and the research firm of Louis Harris & Associates.

Pretty powerful and important - controlling the news that's distributed through all those outlets + the 7 million subscribers to McPaper. All pumped out from a central source in  Tysons Corner, VA under the motto "It's all within reach" - which is true, and folks at Gannett plan to keep it this way. So today they published "Trump is unfit for the presidency", a ringing un-endorsement of the Elvis from Queens, in their flagship "newspaper".


He sounds a lot like a guy named Al Neuharth by these descriptors and the crazy truth of the matter is - Trump probably IS a lot like Al Neuharth. Except for one thing - one very important thing - Trump wants to move power and money OUT of Washington DC and back to the people and communities that Al Neuharth wanted to "incorporate" (psychologically) with his stupid newspaper. This USA Today editorial endorsement - an endorsement to "stay true to your convictions" - was the first of its kind in the papers 30+ years of publication. The message: Vote, don't vote, do whatever you want but whatever you do remember, #NeverTrump raises very troubling questions (at least it's troubling to me).

How can we have created a society were it's okay for an erratic, uninformed to incoherent, racist, sexist, xenophobic, liar and flim-flam grifter who speaks coarsely and recklessly to become a Billionaire? Shouldn't those attributes disqualify someone from becoming so extravagantly wealthy and powerful? Isn't Trunp's unfitness for the presidency also an indictment of Americas capitalist system of finance, ownership and commerce? Why is it alright for someone like Trump to make millions of dollars and control a vast real estate empire (or in Neuharth's case a vast newspaper empire) and NOT be qualified to become POTUS even under emergency circumstances?

When I contemplate these questions I keep coming back to the same conclusion - it's all bullshit. Trumps not unfit or unqualified to be president - no more unqualified than a junior Senator for Il or a Texas Gov - in fact, if anything he's more qualified than most having clawed his way out of Queens to a 5th Ave penthouse he must have some talents and capabilities. My guess is that the newspapers editorializing against him just don't want to see him use those gifts on behalf of the American people and at the multinational conglomerates expense.