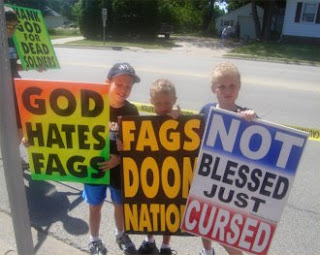 One of the things that's always bugged me about the Westboro Baptist Church based in the great State of Kansas is that they're a bunch of pussy's when it comes to lifting a finger to bring down the wrath of God on the sodomites, Jews, musicians and many, many, many other sinners who disobey God's word. It's like they really don't believe their own preaching - They're sort of like the Occupy Wall Street gang in that they make a bunch of noise, say outlandish things, think they're "right" based on an interpretation of texts far removed from their daily experience but, in the end, will never throw down and start fighting (or more to the point, start killing). They're weak (as DJT might say) and don't back up their rhetoric with any meaningful action. Granted, any organization that will protest a Guns & Roses concert can't be all bad, but taken as a whole WBC sucks eggs and it's members will probably suffer eternal damnation - fear the Lord.


Arrowhead Stadium in Kansas City, MO    June 29, 2016  7:15 PM - 8:00 PM
WBC to picket near Arrowhead Stadium where Guns N' Roses performs and teaches proud sin to their fans.  WBC must remind them how much it displeases God for them to use the platform he gave them to blaspheme His name.  Guns N' Roses is part of the rock-band era (late 1980s-early 1990s) known as the hedonistic rebelliousness period.  With their debut album, Appetite for Destruction, they burst on the scene with their Hell Tour in 1985.  From then until now band members have lived lives of notorious proud sin, with the three tenured members - Axl Rose, Slash and Duff McKagan - changing sex partners more often than their socks, and racking up multiple divorces/remarriages. 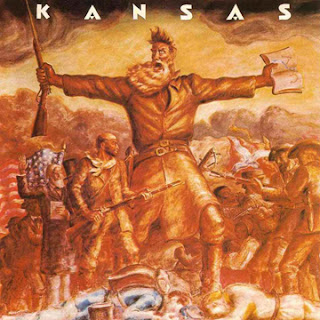 Axl Rose has a better chance of walking through the pearly gates than your average WBC congregationalist though, admittedly, his odds are one in a million. Why? Because good or bad, right or wrong, Axl Rose will take off his leather jacket and start swinging fists - kicking, biting, pulling hair - going as far as he needs to go (and beyond) to make his point. He's many things but he's no pussy. When it comes to morality Axl is closer to Kansan John Brown than he is to the sunflowers who populate the WBC and as any historian knows - John Brown meant what he said. If you want to kill some pro-slavery folks in Kansas, where kill'n was free and easy in the 1850's then go for it, because you might as well have been in the Land of Oz as far as polite society goes, but if you haul your ass down to Harpers Ferry, Virginia (it was still Virginia in those days) and pull the same stunt, why, you might just ignite a civil war.


Which brings me to Omar Mateen and his commitment to abolishing homosexuality (among other things) in the most magical place on earth - Orlando, Florida. There is a stereotype of middle eastern men that paints them as perfumed, sissified, duplicitous scoundrels who beat their women and bend over 5 times a day for their god. It's not fair to generalize, but in this case the prejudicial sketch hits the mark like a SWAT sniper zeroed in on a cackling jihadi clown turned (BANG!) shit stain. And the Westboro  Baptist Church should take notice because if they think their "god hates fags" then "Allah really hates fags" and his swarthy followers will go postal to make the hate real. One might even surmise that the WBC are worshiping the wrong god and should convert to a religion better aligned to their principles. How the actions of this 21st century abolitionist will play out is anybodies guess, but if history can be used for a guide I see rivers of blood in our future.