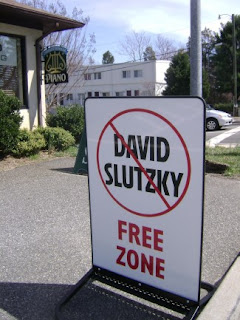 In my neck of the woods we had a Chairman of the County Board of Supervisors named David Slutzky who was up for reelection a few years ago and I remember marveling at the fact that a man with the name Slutzky thought he could get elected to anything in an English speaking country. If you want to go into politics and you're burdened by a name like Slutzky then change your frigg'n name for Christ's sake and give yourself a fighting chance. Nope. Slutzky lost to the affable Rodney Thomas - you know the guy with the normal last name that you didn't feel dirty saying.

This story sprang to mind the other day when I heard that Bill Kristol (another great name) had chosen a different David - not David Slutzky but David French - to be the alternative 3rd party presidential candidate to HRC and DJT. Mr. French is a wonderful choice as a war vet, lawyer, author and staff writer at National Review he is the perfect naval gazing, hide bound, orthodox constitutional "conservative" that's been driving the GOP into the ditch (even when they win) for decades. I'm sure there are many, many Republicans and Independents who simply can't vote for the two leading candidates and will jump at the opportunity to punch out a chad for President French.

Did I just type what I think I typed? President French??? Help, my fingers are melting... melting!

Look, no one is a bigger francophile than I am - I love the history, the culture, the shady duplicity of the French political class and though the percentage of Frenchmen who "get" entrepreneurial liberty and republican virtue is a distinct minority (I peg it at 25%) they get it at a depth that few other nationalities achieve and carry the load for all the rest of pompous self-regarding libertines who populate the country. But I can assure you that there will #Never be a President French in the United States of America - there is a better chance of a President Slutzky getting elected this November.