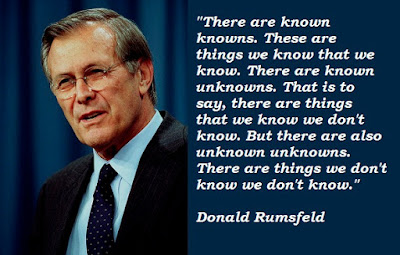 Let it be said that Politico is one of the most worthless web sites with clout on the internet - it's like the Washington Post after a night of hard drinking in the Georgetown bars that passed out on a friends couch. Predictable and stupid at the same time - Also, the editors appear to despise democracy as a political science and as practiced here in the USA. Their latest "explanation" for the Trump phenomenon takes aim at the voters and their knowing ignorance which can be easily explained by the Dunning-Kruger Effect. The article written by shrink/educator David Dunning illuminates a big, glaring problem in any democracy, and that is, "we all run the risk of being too ill-informed to notice when our own favored candidates or national leaders make catastrophic misjudgments." Shit, now you tell us, for surely this is not a problem unique to 2016 and probably was in effect in 2000 and 1980 and 1968 and so on...


But as a psychologist who has studied human behavior—including voter behavior—for decades, I think there is something deeper going on. The problem isn’t that voters are too uninformed. It is that they don’t know just how uninformed they are.

This cognitive bias (a pernicious from of false-concousness) needs to be addressed and maybe it's the reason president Obama signed his Executive Order -- Using Behavioral Science Insights to Better Serve the American People last fall because the American People need behavioral science to lead them to a golden future - one they're too close minded and self-assured to even realize exists. It makes you wonder how we've managed for all these centuries using the old system of simple voting to choose our elected representatives? Though the voters might be un-informed, ill-informed or over-informed the blind spots in their overall knowledge never get completely filled in so they make dangerous choices but we live with it and go on about our lives as best we can.

I for one am a big believer in democracy and my trust in the democratic process has grown over the years through hard (sometimes devastating) experience. I'll give you a good for instance: In the 2012 election I supported Mitt Romney for president over Barack Obama. I had nothing against Obama personally and always kind of liked him - especially the way he took out HRC in the Dem primary of '08 and assumed the burden (if you can call it that) of FBPOTUS. But I thought the DC centric policy and regulation heavy administrative state was a job killer and the entire ethos of his practical presidency was warmed over New Deal/Great Society dog vomit. Romney was not my preferred candidate with his nerdy money man persona and weird religion but, hey,  I sucked it up like millions of republicans and pulled the leaver for Wilber. Romney lost and, whoops, there goes the republic, right? Wrong. How very, very wrong I was did not become apparent until years later when Mitt Romney pulled this stunt:


I did not know the man I voted for but I voted for him anyway and now I thank God for all the Obama voters who overruled my choice. I am a knowledgeable, well informed voter but I made the same mistake that millions of other voters made that year and though I was disappointed on the first Tuesday in November 2012 I am elated now. Who could have known that this turncoat would implode with indignant rage over a GOP candidate who hadn't even won the nomination but was in the middle of a fight with the best and brightest of the party. "Improvident choices" are the only choices we have and the only choices we will ever have. Onward, into the abyss.