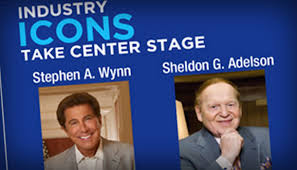 Bush backers have expressed doubts about a third try at the White House by Romney, while Romney supporters question whether Bush has the passion it takes to mount a successful bid.

CHUCK TODD:
No, there were some other interviews. I want to quickly get to Mitt Romney and Jeb Bush a minute. First, I should play that. Kelly O'Donnell was referring to Donald Trump and his little laugh line or whatever you want to call it. Let me play it really fast.
DONALD TRUMP (ON TAPE):
It can't be Mitt because Mitt ran and failed. He failed. The last thing we need is another Bush. He's totally in favor of Common Core. He is very, very weak on immigration.
CHUCK TODD:
Helene, nobody's going to mistake Donald Trump for a presidential candidate. I don't think. Other than Donald Trump these days. But the fact that Mitt Romney and Bush were essentially a punch line.

SHELDON ADELSON: All I know is that the Mormons are pissed but they can't move the Bush people an inch. They know they've got no juice if Bush won't give them the organization and so they're forced to go along with it.
STEVE WYNN: We all know that Mitt would never rise any higher than VP in one of our companies so I don't blame the Bush's for hobbling him, but for the love of God, are they really going to push Jeb as the chosen one? I don't see it.
DONALD TRUMP: Low Energy. Weak.
PHIL RUFFIN: Well, Donald, you're always talking about how screwed up these guys are. Why don't you jump in.
DONALD TRUMP: I'm ready to go. Got a great slogan already trademarked: Make America Great Again and I told the RNC that Bush would only become president over my dead body. I just need my friends to help me keep Bush or Romney from getting enough money and support to give me a fighting chance. All I'm asking for is a chance to make my case.
STEVE WYNN: Hey, I hate giving money to any of them. I'll talk to the New York and Boston guys and tell them to hold off Donald. I know you'll give it 100%.
SHELDON ADELSON: Okay, Donald, I'll tell the tribe to give you a shot. Just promise me you'll do better then Newt did against Romney last time - that was good money after bad. I'll put one million dollars on you today and if you pull it off I'll give you the winnings for the general election. What are the odds?
DONALD TRUMP: Probably 100 to 1 but don't place the bet yet. If Bush formally announces then I'll jump in. I will win, I can tell you that. It's going to be huge.

Yep, it's going to be huge alright.