I fought the bathroom law and the law won 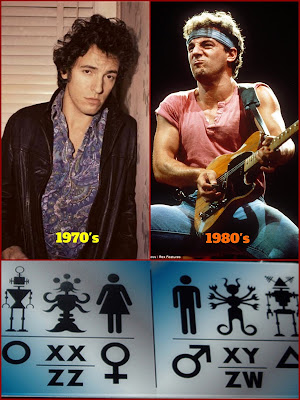 When I was younger (circa 1982) I had a housemate from New Jersey and he loved, loved, loved Bruce Springsteen. They didn't call him "the boss" in those days, or at least my friend didn't, but he would wax poetical about the power and glory of Springsteen. I say this with all due respect and admiration but there are few popular troubadours with a more ardent and fanatical set of groupies than BS. In my opinion Born to Run, Darkness on the Edge of Town and The River are great records all released between 1975 and 1980 - everything after that is different and, truth be told, not that good. So when he cancels a show in sad little Greensboro, NC choosing to not stand and not sing and not perform in "solidarity for those freedom fighters" who want to use the girls bathroom (and who can blame them - much cleaner) but to send a message by his absence I couldn't care less but his devoted followers must be crushed and, knowing the Springsteen fan as I do, they're probably a little pissed off too. You see most Springsteen fans don't give a damn about Transgender rights - the guy is not LGBT music in any way, shape or form. Chris Christie is the archetypal Bruce Springsteen fan and he's about as non-Trans as you can get and, as with many Bruce fans, he knows the object of his adoration hates him. And if The Boss hates Christie (as he obviously does) then imagine his contempt for the average North Caronina Springsteen fan - I have to admit that I can't even conjur a visual of what said individual might look like or the twisted musings of such a persons mind but the aesthetic and psychological profile clicking into place in my minds- eye is terrifyingly un-gay (as in not happy).

The Greensboro rubes should understand that Bruce is just jumping on the bandwagon that all corporate schlubs are hitched to but that won't ease the sting of rejection and self-righteous disdain rendered through his judgement. And this forces the question: what happened to Bruce Springsteen? My former housemate was not wrong (at least he wasn't in 1982) that Springsteen had released a series of fantastic Rock & Roll records - and it must be said that whatever his foibles the guitar man does love R&R - but in the early 80's there was a subtle yet profound change in his music. Chalk it up to the curse of tuning 30 years old (a curse for those who play Rock & Roll anyway) or the deleterious influence of his back-up singer Patti Scialfa or simple fame but something changed in the man and his music that made him and it unlistenable. He drove away from Jungleland in a Pink Cadillac and ended up Dancing in the Dark - everyone knows that the best Springsteen music was written before 1982.

His best song IMHO is The River which aside from being a great song/poem about life is also the quintessential Springsteen tune and perfectly illustrates the overwhelming iron law of nature which judges human hopes and dreams as mercilessly as The Boss judges the voters of North Carolina. I can still remember the time I first heard this song squawking through the radio of my Grand Prix as I drove the winding roads of the Virginia Piedmont on a humid July evening in the early 1980's and thinking "man, that is a sad, beautiful, truthful song" written by the authentic minstrel of Jimmy Carter's America.

The Bathroom Law will not be repealed because there are laws of nature that simply will not be ignored - can't be ignored. You can call it unfair or unequal but boys and girls are designed differently and that is something Bruce Springsteen used to understand - and even if he's forgotten this fact his fans have not.