on the dark side of the road 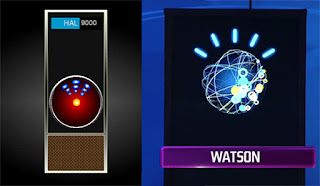 For my money, Don't Think Twice, it's All Right is one of Dylan's greatest songs and The Freewheelin' Bob Dylan is a beautiful album published in 1963 in the early years of the information age. Computer Science was all done on a mainframe in those years and since there were no computer science departments at any colleges (and wouldn't be for another 20 years) the guys from Bell Labs and IBM raided the Music Conservatories to find talented software writers - it turns out that musicians have a facility for writing code which isn't surprising if you think about it but is sort of ironic in light of the Watson AI advertisement posted above. The first pop-culture representation of this mainframe AI was the benevolent/malevolent villain Hal 9000 murdering star men in Kubrick's 2001: Space Odyssey - but Hal eventually got his comeuppance. One of the many unsettling aspects of Kubrick's film is the sense that the Hal 9000 is more human than the evolved placid robot-man astronauts being snuffed out by its jealous artificial intelligence.


If you want to hear the original (and inspiration for the film) then take a listen to the IBM 7094 from 1961.


We're 15 years past 2001. Lousy space station, no Moon base and no mission to Jupiter, but we do have AI and she's a beauty. Created by the big brains at Microsoft her name is Tay and she only lived for about 24 hours before some Redmond geek crawled into her brain and started pulling the tapes. Her comments were very un-Hal 9000 and more Black Twitter like which, it turns out, was a design point of the AI. I don't know if you've ever met an 18 year old girl with a wicked sense of humor but if you haven't yet had the pleasure here's what she sounds like.

Believe it or not, Microsoft did stress-test its youth-like code to make sure you had a "positive experience." However, it also admits that it wasn't prepared for what would happen when it exposed Tay to a wider audience. It made a "critical oversight" that didn't account for a dedicated group exploiting a vulnerability in Tay's behavior that would make her repeat all kinds of vile statements.

Oh, I believe it. Do I ever believe that the folks programing Tay AI had no idea what irreverent, politically incorrect, free thinking and funny people might put in their girls mind. They wanted to create an 18-24 year old girl and, presto, they got one! So they killed her.

It's not lack of imagination - it's lack of reality that gives us the melodious Douglas Rain voice of Hal 9000 or any of the other AI characters in film history. The real AI that takes over the world will probably be a screaming lunatic who uses scathing insults and unsettling strategic gambits to destabilize the humans and bring them to submission.