March 09, 2016
As a young man traveling abroad I once found myself living in the home of an elderly Catholic woman of modest means in the suburbs of London. Her grandson was a curious young lad and loved to hear stories about life in the United States and one day, almost as an aside to the topic at hand, he asked my religion. I told him I was Episcopalian - "It's sort of like being an Anglican," I explained. Looking at me sternly he questioned, "Don't you have a fear of going to Hell?" Family members shushed the boy but he persisted because, liking me as he did, he really was quite concerned for my soul and I appreciated his heartfelt charity. I explained to him that living in the USA is quite different than living in England and while we acknowledge and sometimes make fun of each others religious differences there was very little history of State sanctioned persecution of a religious sect or denomination. We all get along, Catholic, Protestant, Jew, Muslim, Socialist - all the major religions are treated equally under the law and the real misfit religions are given elevated status to protect them from persecution. That's just the way we role in the USA - or at least it was, but perhaps the game board is getting a new set of rules.

Today the brilliant Robert P George penned an open letter addressed to his fellow true believers and asked for their sectarian support (and the support of other men of "good will") to band together and defend the Republican party. Why? Because the Republican party defends protection for unborn children, religious freedom, traditional marriage and limited government. Never mind that it does a lousy job of defending those things - it's the thought that counts. Even though it has consistently lost ground on these "Catholic" issues over the past 30 years now is the time to band together for one urgent reason.

There is a heretic loose in the land who's chief concern is wage stagnation, grossly incompetent governance, profligate governmental spending, the breakdown of immigration law, inept foreign policy, stifling “political correctness” and he must be stopped. Call them Protestant issues that insult the divine will of the New Rome and its chroniclers. But as the voting results were tallied from Americas erect penis last night it became obvious that the defenders of the faith need a more impactful message to keep their flock in atonement with God, country and party.

And as bad as it is for a Protestant heretic to win it could actually be even worse if you're a Catholic Democrat. 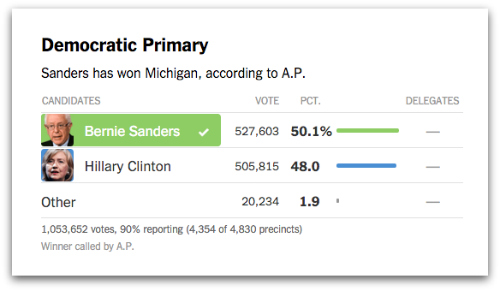