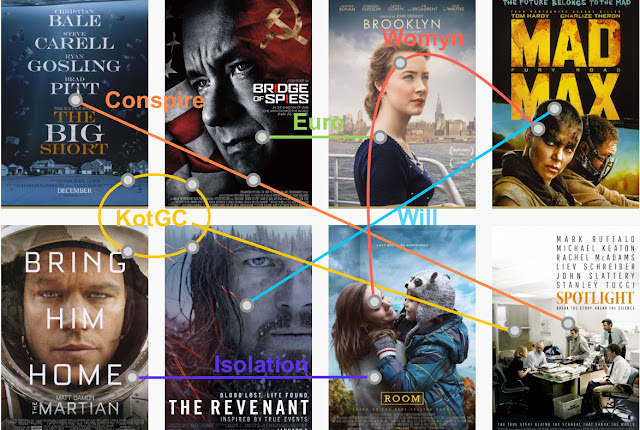 8 movies and 6 themes - so let’s take the overarching ideas first:


The Flicks
The Big Short: Stupid rehashing of the 2008 sub-prime mortgage crisis and ensuing financial meltdown and how cleaver guys made a boatload of money off others misery - welcome to the free market Hollywood and how I wish I could short box office on some of your movies.
Bridge of Spies: Cold war drama from SS and Hanks but honestly I just can’t get too excited about this drama when we have a limp Marxist in the White House and proud Stalinist running to take his seat - I mean who won the cold war anyway? Don’t tell me it was the USA.
Brooklyn: Weeper for the girls with nostalgic pastels and two guys in love with the same young beauty torn between her old life and the new world. Yack.
Mad Max Fury Road: “The Future Belongs to the Mad” is the tagline - what crap. Geo. Miller made this move 30+ years ago (The Road Warrior) and by 2015, according to that movie, we were supposed to be living in this movie NOW. Didn’t happen so he’s pushed out the apocalypse and added a South African twist with a crew cut. That being said, video game is pretty good.
The Martian: To quote David Bowie - “Is there life on Mars?” Answer: Not really. Science and human ingenuity will win the day but Gravity was a much better movie and it didn’t win either.
The Revenant: Best picture hands down and beautifully shot and acted. Cinematography is off the hook and has one of the coolest Indians ever captured on film. Many life lessons imparted and lots of mystical shit for contemplation and spiritual uplift.
Room: (without a view) Plato’s cave within Plato’s cave within Plato’s cave. I was at a dinner party the other day and the ladies to my right and left had both read the book, found it deeply disturbing and couldn’t wait to see the movie to, and I quote, “get it out of my mind” - Interesting formulation that - the idea that a movie gets something OUT of ones mind.
Spotlight: It’s a story so horrifying and dispiriting that one can hardly blame audiences for staying away - I mean who want’s to see a movie about child molestation in the first place and then, on top of that, to have The Church cast as the villain AND weak willed enabler. Jesus Christ, have mercy on us all, but come on man, some stuff is unforgivable.

There was one movie (movie number 9 if you will) that got left off the ballot for this years Best Picture and for the life of me I can’t understand why because it embodied all 6 themes in a single film. 1. Drug cartels and the CIA, 2. Euro vs. America, 3. Girl learns hard lesson, 4. Stars 2 KotGC and one of them, Del Toro is downright magnificent, 5. Will power and revenge and forgiveness in spades, 6. Right through the looking glass baby and don't look back. Also, plays like Trump campaign propaganda (but maybe that's the rub for the wives and secretaries who actually fill out the ballots).

Sicario: Great movie comprising a gritty tale of revenge and redemption with killer (literally) acting and stunning Cinematography + Film Score. Should have been nominated and could have won (also has Latino and  Black actors playing 3 demential roles which is, well, different).