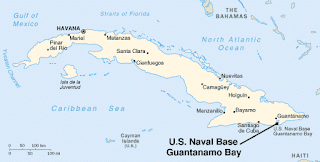 Being an American of average intelligence who doesn't give a rats ass about Spanish American history and with the cursory education I received on the subject during my school aged years I remember well my surprise when watching early 90's movie "A Few Good Men" which explores a military trial of a murder cover up at a place called Guantanamo Bay Naval Base in Cuba. The US Navy has a base in Cuba? How the hell could that be true? I thought we had this contentious, hateful stand off with Cuba and the Castro regime with boycotts and near nuclear war. How long have we had this naval base there? For well over 100 years as it turns out.

Yes, you learn something new everyday and I learned a little bit about GITMO from that fine film where Captain Jack has his famous meltdown on the stand and blurts out "the truth" that leaves Tom Cruz shocked and speechless until he regains composure and gets back to his niggling question.


"The blueprint offered few specifics, refraining from mentioning any of the potential replacement facilities the Pentagon had visited in preparing it, including military prisons in Leavenworth, Kan., and Charleston, S.C., as well as several civilian prisons in Colorado."

There is no plan to "close GITMO" as is often reported on the news, but rather a plan to move the detention facility on to American soil and, in essence, build a bunch more "GITMOs" right here in the USA. Great idea Barack - bring it on home. Every State could have their very own facility for indefinite detention of "enemy combatants" who could be captures and held without due process as long as the military deemed necessary. What could go wrong?