You know, a place that is unrecognizable 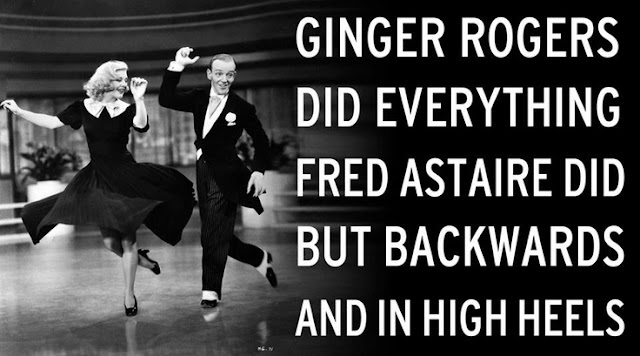 I've got to say that I just love interviews that Barack Obama gives to friendly press outlets like the NYTimes where he just sort of, you know, speaks his mind. Readers get the real deal, unscripted and off-propter which is pretty amazing but only because he knows that the interviewer already knows exactly what he's trying to say because the interviewer feels exactly the same way as he does.


“We had as competitive and lengthy and expensive and tough a primary fight as there has been in modern American politics, and she had to do everything that I had to do, except, like Ginger Rogers, backwards in heels,” Mr. Obama said. “She had to wake up earlier than I did because she had to get her hair done. She had to, you know, handle all the expectations that were placed on her. She had a tougher job throughout that primary than I did.”

Yes, the Democrat musical of 2008 was wondrous to behold - Barack dancing on the ceiling and Hitlery doing her best to keep up with all his crazy moves. And of course being a woman put her at a real disadvantage what with the high heels and early morning hair appointments and, you know, all the rest of it - women's stuff. Hyper sensitive feminists might mistakenly read this Presidential analysis as somewhat "sexist" but hey, this is Barack Obama talking so you know it couldn't be coming from that place because that place is "unrecognizable" in a Democrat politician. Or, you know, even a normal Republican politician like say John McCain:


“John McCain was a conservative, but he was well within, you know, the mainstream of not just the Republican Party but within our political dialogue,” Mr. Obama told Politico. The president said voters would have to judge “the degree to which the Republican rhetoric and Republican vision has moved, not just to the right, but has moved to a place that is unrecognizable.”

You know what Obama means when he talks about "our political dialogue", right?