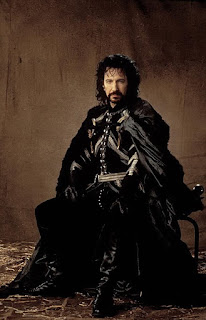 With the passing of Alan Rickman I am compelled to call out what I consider his most compelling and successful film role. There are many, many characters that Mr. Rickman brought to life on the silver screen including, of course, the conniving kraut Hans Gruber who blew up Nakatomi Tower in a grim foreshadowing of terrorist tactics. But his greatest achievement, in my mind, was his role as the Sheriff of Nottingham in the horrible Kevin Costner vehicle, Robin Hood: Prince of Thieves. It is show biz rumor that at the early test screenings of the film the audience cheered Rickman and rooted for him to kill Costner in the final sword fight - the producers had to go back to the editing room and cut out chunks of Rickman's scenes to make him less appealing and even after that butchery it's a toss up as to who to support - the tortured charismatic sheriff or the bland American interloper.