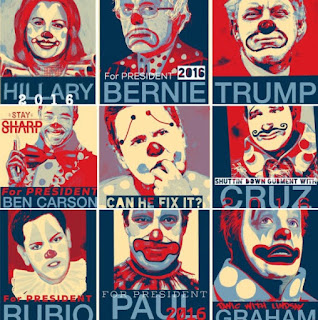 Ringing out 2015 I salute artist Will Espada who has been painting clown faces on political personalities - why I'm not sure, but I like what he's doing. One of the nice things about living in America is the freedom citizens enjoy including the freedom to be-clown the high and mighty. Frankly, there's not nearly enough of it here in the USA or around the world (and believe me, the world leaders are even more deserving of the Bullfighters efforts than are our domestic politicians). "Leaders" hate this stuff, which is to be expected, but it is important that they be ridiculed and defaced to instill some humility in their warped consciousness. It's just too bad a man of Espada's talents focuses on the big dogs and doesn't use his clowning gifts to paint the faces of these guys and gals campaign manager, communications director and staffers. Oh well, maybe in 2016 he'll take them on.