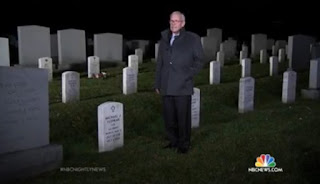 Nothing like a walk among the grave stones when ruminating on the cost of intolerance to drive home the message - especially if you've got one foot in the grave yourself. What's it to you if ISIS uses Americas incredibly generous and wide open immigration laws to export Jihadi nut jobs into the country and terrorize the population? You'll be gone in a few years anyway and it'll be some other fellows problem. Yes, Tom Brokaw has seen a lot in his lifetime, but NOTHING as dangerous as Donald Trump from Queens, NY who's intentions are analogous with FDR and Hitler - Tail-gunner Joe and Jim Crow. That's bad man, really bad because Muslims are just people like Japanese and Jews and Communists and Blacks - all of which have fought and died in the US Armed Services (hey, don't forget the Irish!).

The best thing about the NBC News handwringing was the lead in WebVert for Psoriatic Arthritis titled "Double Whammy" because it describes the kind of trouble we're in. See, PsA is a chronic inflammatory disease that attacks both your skin and your joints - that is to say, it makes you sick and unsightly on the outside with a red rash and it makes you ill on the inside by restricting your freedom of movement. It's kind'a like Jihadi terrorism on a personal level. And treatment, well, that depends on the kind of PsA a patient has. Some forms of psoriatic arthritis can be remedied through something as simple as a lifestyle change and better diet but for other forms of the disease harsher remedies are required.


Some types of psoriatic arthritis treatments are systemic (medications available in oral or injectable forms), so they work from inside the body to treat both skin and joint symptoms. The type of treatment your doctor recommends will depend on several factors, including the severity of your PsA.

So the issue of Jihadi terrorism and weather The Donald is going too far comes down to the diagnosis. Barack Obama, NBC News and the entire Washington DC establishment think we can solve the terror problem with healthy lifestyle choices and better diet - that includes reducing our carbon footprint. Trump and half the US population think the problem is systemic and will require everyone to take the Red Pill to free their mind and attack the disease from the inside out. Just how sever is the ISIS terror problem? Does anyone really know that answer? Can someone please call a Doctor?