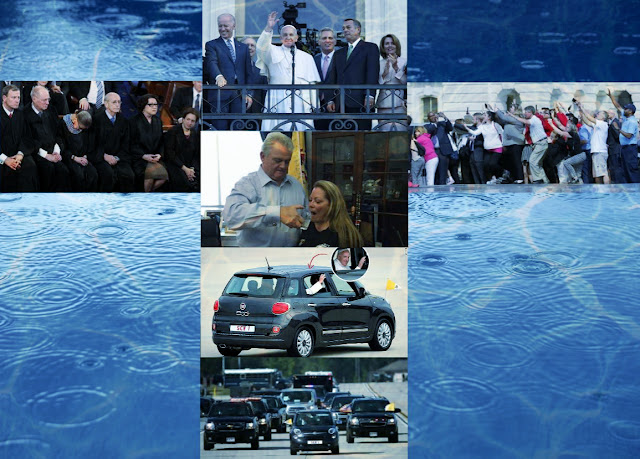 With the Democratic presidential race in turmoil what could be better for a prospective nominee than a ringing endorsement from a idolater who's certifiably insane. When the Vicar of Christ is on your team all things are possible - even a Biden presidency. Like any politician the Pope loves to talk about big ticket issues that can never be resolved and avoid thorny issues that he actually has the ability to do something about but for which he lacks the will to act. Perhaps if he stopped praying about income inequality and climate change and started praying to God Almighty for courage and willingness to face the future, instead of the past, that would change. While in the USA he admonished the nation to:


You know, all that stuff that America is so bad at doing. But we've got to try because "life means 'getting our feet dirty' from the dust-filled roads of life and history," and after we're dirty,"all of us need to be cleansed, to be washed, all of us and me in the first place." Such humility. Even so, some dirt can't be washed off.


"On some matters, he likely arrived too late to make a difference. The first Latin American pope reiterated, in a veiled reference, the Roman Catholic Church's opposition to abortion and defended traditional notions of the family in a nation where gay marriage is now the law of the land."

Too late? Oh, I don't think so. The Pope could end abortion on demand before the end of the year with his powers of excommunication if he chose to enforce them. How many of these Senators and Congressmen would pull a U turn on abortion if Pope Francis held their feet to the fire? Why, even lunch bucket Joe Biden would cave like an eight month old fetuses head if he faced the possibility of missing Mass on Sunday. Supreme Court would rule 6-3 that the law, whatever it is, is constitutional. No, not too late - too cynical and weak (to be charitable) or evil (were I of a judgmental disposition).

No wonder a fat, lazy, machine politician like Bob Brady want's to drink from the Pope's poisoned chalice. It's all upside as far as he's concerned (or almost all) - he'll never be held accountable regardless. Want proof? On his way to the Papal jet his holiness dropped in for a meeting with victims of sexual abuse at the mischievous hands of Catholic Priests, Bishops and Cardinals to offer his condolences. He wanted to make his pronouncements clear so "speaking in his native Spanish" he said that "God weeps for the sexual abuse of children."


"For those who were abused by a member of the clergy, I am deeply sorry for the times when you or your family spoke out to report the abuse, but you were not heard or believed. Please know that the Holy Father heard you and believes you."

Now, I hope you're satisfied, onto wealth redistribution and climate change! But Bob Brady and Joe Biden might want to pause and consider the long term effects of their limitless affection for a Church that can not assess the past honestly and will not look behind the door to the future. This opens a path to a Godless future of strife and misery as presented in the fine 2014 film Calvary where the shepherds see their flocks turn into wolves and all the tears from heaven can not make them baahh.

God does not weep. We humans are the ones who cry and look to religious leaders who will give prudent guidance and spiritual wisdom on how to navigate the pressing issues of today and tomorrow.


There is an important role for religion and faith in the development of a healthy human psychology, but something is amiss in Bob Brady's spiritual training. Someone filled his head with images of a weeping God who turns a blind, teary eye to his transgressions with a priests blessing. There will be hell to pay for this dereliction of duty.